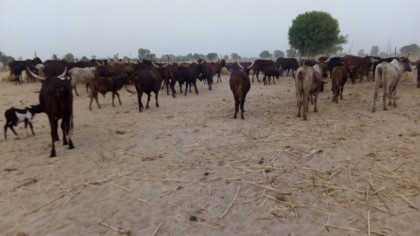 SK Usman, Abuja: Troops of Nigerian Army deployed on Operation LAFiYA DOLE and other Internal Security operations have been carrying out clearance operations, patrols and raids in suspected areas where Boko Haram terrorists, cattle rustlers and other criminals were hiding or sighted with success. It is in this regards that troops of 232 Battalion of 23 Brigade today conducted patrol towards Gombi, Guriki and Bobini towns in Adamawa State to prevent Boko Haram terrorists infiltration from some parts of Borno State.

Other units under the Brigade have also conducted patrol to Wurolade village to prevent the terrorists infiltration through our border with Republic of Cameroon. While those deployed at Hong have intensified patrol at Mararraba Pella, Kalla and Shangui as well as Hong- Garaha road.

The 33 Brigade Nigerian Army following a tip off on the presence of suspected cattle rustlers and armed bandits at Dutsen Kelembu around Dogon Ruwa, Ningi Local Government Area embarked on fighting patrol to the general area. Although the suspected criminals have fled, the troops recovered 1 AK-47 rifle, 1 locally made gun and an empty magazine buried in cow dung. The patrol team destroyed the cattle rustlers’ camp.

The troops of 251 Battalion, 7 Division Garrison deployed at Ummarari yesterday while on routine patrol discovered 2 wrapped suicide bomb vests possibly kept there for pick up in the bush. The troops called the Nigeria Police Explosive Ordinance Team who safely detonated the vests.

The troops of 7 Division Gun Boat Company responded to a distress call by cattle rearers at Aramari village very close to Konduga on the presence of Boko Haram terrorists rustling over 1,000 cows from them. The troops mobilized and rescued 2 persons along with the rustled cows intact while the terrorists fled.

On their part, troops of 145 Task Force Battalion of 5 Task Force Brigade arrested a suspected Boko Haram terrorist, Auta Abdullahi attempting to enter Damasak from Niger Republic. Although the suspect claimed to be herbs dealer, preliminary investigation has confirmed his membership of the Boko Haram terrorists group. Nevertheless, he is being further interrogated.

Some elements of the Brigade while advancing to clear an objective encountered an Improvised Explosive Device (IED) at Duoma near Damasak. The fragment of the IED damaged the door of one of the Armoured Personnel Carrier. Further investigation confirmed that the IED was made of comportments of Acetylene Gas Cylinder and Pressure Plate Switch.

On Saturday night 2 female suicide bombers attempted to enter Maiduguri through Ummarari. One of them was shot by a soldier while the second panicked and detonated the suicide vest strapped to her body. There were no casualty beyond the two suicide bombers.