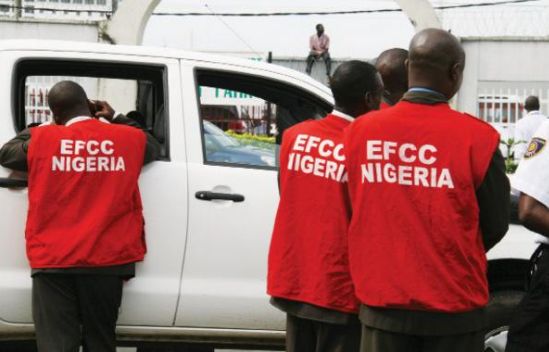 inno.korieApril 4, 2017 5:22 pm 0
Wilson Uwujaren, Abuja: Justice I. E. Ekwo of the Federal High Court sitting in Calabar, Cross Rivers State has remanded the Chief Medical Director of University of Calabar Teaching Hospital, Professor Thomas. U. Agan, two other staff of the University and promoters of two companies in prison custody.
This was  following their arraignment on Monday by the  Economic and Financial Crimes Commission, EFCC  on a five- count charge bordering on alleged conspiracy,  bid rigging, abuse of office and breach of due process contrary to the Procurement Act of 2007
Two other staff of the Teaching Hospital arraigned with Agan are Offor Jonan Offor, Head, Works and Engineering and Francis I. Utu, Chief Administrative Officer and Head, Legal Services. The other two accused persons remanded in prison are Okocha Anthony and Emmanuel Etta Nkim, both owners of Anchor Industrial & Construction Services Nigeria Limited and Basemark Energy Nigeria Limited respectively. The companies were allegedly used to perpetrate the fraud.
Agan and his two other colleagues were alleged to have used their positions to corruptly influence the award of the purchase of a Life Support Ambulance Vehicle and one Toyota Coaster Bus to Anchor Industrial and Construction Services Nigeria and Basemark Energy Nigeria Limited by inflating their costs and without following due procurement processes to the tune of N85, 062,000.00 thereby contravening the provisions of the Public Procurement Act 2007.
Count one of the charge read, “That you Prof. Thomas U. Agan  as Chief Medical Director, University of Calabar Teaching Hospital, Offor Jonah Offor as Head of Works and Engineering, University of Calabar Teaching Hospital, Francis I. Utu as Chief Administrative Officer and Head of Legal Services, University of Calabar Teaching Hospital, Okocha Anthony being the alter ego of Anchor Industrial and Construction Services Nigeria Limited and Emmanuel Etta Nkim being the Alter Ego of Basemark Energy Nigeria Limited sometime in the month of October 2015  in Calabar, Cross Rivers State within the jurisdiction of this honourable court did conspire amongst yourselves to bid-rig for the purchase of one Advance Life Support Ambulance vehicle and one Toyota Coaster Bus 30 seater to Messrs Basemark Energy Nigeria Limited and Anchor Industrial and Construction Services Nigeria Limited contrary to Section 58(4) of the Public Procurement Act (PPA) 2007 and thereby committed an offence punishable under Section 58(5) of the same Act”.
When the charges were read to the defendants, they all pleaded not guilty.
In view of their pleas, prosecution counsel,  Kayode Oni asked the court to remand the defendants in prison custody and to fix a date for trial. However, an attempt by the defence counsel,  Mba Ukwenyi, Senior Advocate of Nigeria, SAN, to move an oral application for bail for his clients was refused by the judge who ordered that a formal application be filed.
Justice Ekwo adjourned the case to May 8, 9, 10, 11 and 12 for trial and ordered that the accused persons be remanded in prison custody.