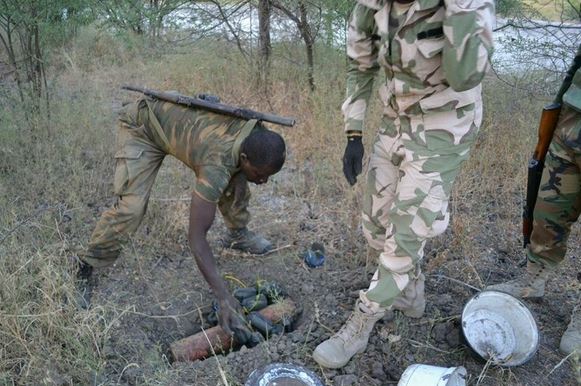 A team of UN experts has arrived in Nigeria to assess the number  of  landmines  Boko Haram terrorists have laid in the Sambisa Forest.

Ms Agnes Marcaillou, Director, UN Mine Action Service (UNMAS), told a  correspondent of the News Agency of Nigeria (NAN) in New York that the team arrived the country on Tuesday.

According to her, the assessment is with a view to de-mining  and clearing  the area  of landmines.

UNMAS collaborates with 11 other UN departments, agencies, programmes and funds to ensure effective, proactive and coordinated response to the problems of landmines and explosive remnants of war, including cluster munitions.

The Chief of Army Staff, Lt.-Gen. Tukur Buratai, had on Sunday called for deliberate efforts to remove mines from the Sambisa forest  after the sack of the insurgents from the area.

Buratai said the effort required the assistance of the UN, Non-Governmental Organisations and development partners as the country could not do it alone.

Speaking on the UN response, Marcaillou said: “UNMAS has sent some people to Nigeria and they have arrived already today (Tuesday) to explore this matter further.

“I would say that the standard is that we need first and foremost, the involvement of the country in looking at the threat, it’s a partnership.

“The United Nations and UNMAS have no magic wand. We need to get an assessment of the problem together; UN brings the capacities of the UN and the government together.

“And then the Government of Nigeria will take the lead in mobilising the international community support.

“This is because everything that we will do together at one point or another in Nigeria will require funding to meet those needs.

“We need the concrete engagement of the government. We need to have evidence that the Government of Nigeria has put this question as a top priority on its agenda.’’

She, however,  pledged the commitment of the UN mine service to working  with the Federal Government to rid the conflict-prone areas of landmines.

“But right now, the positive side of the story is that we have responded to the call.

“And we have a number of people who have already arrived the country today (Tuesday)  to discuss it further,” she said.