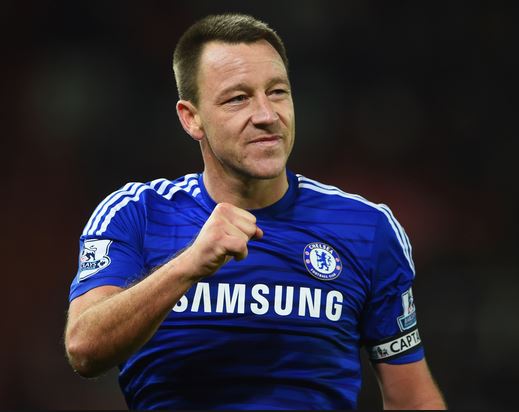 Terry To Leave Chelsea As A Legendary Player After Two Decades

Chelsea captain and former England Captain, John Terry will leave the club at the end of the season after more than two decades there.

He is their most decorated individual, with four Premier League titles, one Champions League, five FA Cups, a Europa League and three League Cups.

Terry is Chelsea’s most successful captain, having led them to four Premier League titles, four FA Cups, three League Cups and one UEFA Champions League title since 2004. He made 713 appearances for Chelsea and is also the club’s all-time highest scoring defender.

“I feel I still have plenty to offer on the pitch but understand that opportunities here at Chelsea will be limited for me,” the 36-year-old Terry said.

Centre-back Terry, who has scored 66 goals for the club he joined as a 14-year-old, has made just four Premier League starts this season.

He is the club’s third highest all-time appearance maker, behind Ron Harris and Peter Bonetti, and holds the club record for appearances as captain.

Terry, who made his debut for Chelsea as a 17-year-old in a 1998 League Cup match, has gone on to score 40 Premier League goals over 19 years.

He has played almost all of his career at Chelsea, other than six loan appearances for Nottingham Forest in 2000.

“I will, of course, always be a Blue and am desperate to end my final season as a Chelsea player with more silverware,” said Terry, whose team have a four-point lead at the top of the Premier League table.

“I’ve always been conscious that I depart at the right time, in the right way, and I feel that the end of this season is the right time for the club and I.”

Terry, the club and Premier League’s top-scoring defender, is one of just five defenders to have won the PFA Player of the Year award.

Terry made his England debut in June 2003 against Serbia and Montenegro, and started his first match for England on 20 August 2003 at Portman Road, Ipswich, in a friendly against Croatia. England won 3–1.

He retired from international football in 2012 after winning 78 England caps and signed a one-year contract extension with the Blues in May 2016.

“I’m eager to carry on playing and so will be looking to continue with a new challenge,” Terry added.

“Words cannot describe the love I have for our football club and our amazing Chelsea fans. You mean the world to me and I will never forget the incredible journey we’ve been on.”

Chelsea director Marina Granovskaia said: “He will always be held in the highest regard by everybody at Stamford Bridge and we look forward to welcoming him back in the future.”