Vice-President Yemi Osinbajo has met with the Secretary to the Government of the Federation (SGF), Mr Babachir Lawal, barely an hour after the announcement of his suspension from office. 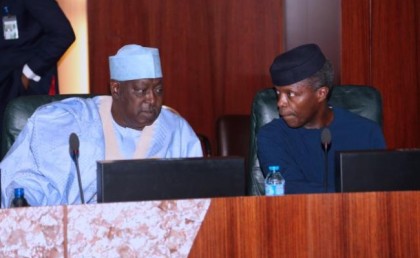 The News Agency of Nigeria (NAN) reports that the closed door meeting of the Vice-President with the suspended SGF might be connected with the committee set up by President Muhammadu Buhari to investigate allegations of misconduct against the SGF.

The three-man committee, headed by the Vice-President, is also to investigate the discovery of large amounts of foreign and local currencies by the Economic and Financial Crimes Commission (EFCC) in a residential apartment at Osborne Towers, Ikoyi, Lagos, over which the National Intelligence Agency (NIA) has made a claim. Read Also; President Buhari Suspends SGF Babachir Lawal And DG NIA

When accosted, the SGF refused to comment on the outcome of his meeting with the Vice-President.

Director General of the National Intelligence Agency (NIA), Amb. Ayo Oke, who was also suspended from office over the discovered funds in Ikoyi, Lagos, was also sighted around the Vice-President’s office immediately after the departure of the SGF.

The NIA boss, who noticed the presence of State House correspondents, however turned back and attempted to pass through Vice President’s exit gate but was prevented from doing so by security officials.

Another attempt by the DG to pass through the service chiefs’ gate was also turned down by the security staff of the gate.

The NIA boss later left the Presidential Villa without seeing the Vice-President at that particular moment.

President Buhari on Wednesday ordered the immediate suspension of the Secretary to the Government of the Federation (SGF), Mr David Lawal and the Director General, National Intelligence Agency (NIA) Amb. Ayo Oke, pending the outcome of investigation of allegations levelled against them.

Media and Publicity Special Adviser, Mr Femi Adesina, said the president ordered an investigation into the allegations of violations of law and due process made against the SGF, Mr David Lawal, in the award of contracts under the Presidential Initiative on the North East (PINE).

The President also ordered a full scale investigation into the discovery of large amounts of foreign and local currencies by the Economic and Financial Crimes Commission (EFCC) in a residential apartment at Osborne Towers, Ikoyi, Lagos, over which the National Intelligence Agency (NIA) has made a claim. Read Also; SGF Babachir David Lawal commends NTA for professionally propagating FG Policies

“The investigation is also to enquire into the circumstances in which the NIA came into possession of the funds, how and by whose or which authority the funds were made available to the NIA, and to establish whether or not there has been a breach of the law or security procedure in obtaining custody and use of the funds.

“The President has also directed the suspension of the Director General of the NIA, Ambassador Ayo Oke, pending the outcome of the investigation,’’ the statement added.(NAN)