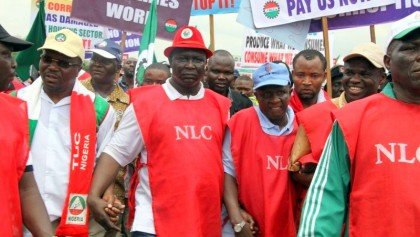 The Nigeria Labour Congress (NLC) has commended the Federal Government over the suspension of the Secretary to the Government of the Federation (SGF), Mr Babachir Lawal, over allegations of financial impropriety.

Dr Peter Eson-Ozo, NLC General Secretary, gave the commendation in an interview with the News Agency of Nigeria (NAN) on Thursday in Abuja.

NAN recalls that President Muhammadu Buhari had on Wednesday suspended, indefinitely, the SGF and Amb. Ayo Oke, the Director General of the National Intelligence Agency (NIA) over allegations of financial impropriety.

President Buhari had also ordered an investigation into the allegations of violations of law and due process against the SGF in the award of contracts as the Chairman, Presidential Initiative on the North-East (PINE).

Eson-Ozo said that the move showed that there were no sacred cows in the fight against corruption by the present administration.

“Even though President Muhammadu Buhari has just taken the decision at this point in time, it was a good one as a lot of people and the NLC have wondered why no concrete steps had been taken.

“The matter had gone back and forth and the nation was informed that the president had received the report clearing him.

“We know that for the purpose of transparency and for the image of the anti-corruption fight, it was like a test case.

“So, it was clear that something more open and transparent needed to be done to ensure that the fight against corruption was thorough.

“In fact, at this stage, Mr President has now found enough cause to suspend him; we think it is a step in the right direction, even though it is a little delayed.

“We hope that at the end of the investigation, the nation would be clearly informed of the outcome,” he said.

Eson-Ozo also called on the Federal Government to continue to ensure proper and conclusive handling of investigations in the fight against anti-corruption in the country.

“This is not a matter of who, it is a matter of process and procedure; once there are allegations and evidences against an official of government or public officer on corruption, the correct steps should be taken.

“Such people should be asked to step aside and proper investigation conducted quickly based on what the true evidences are; there should be no `sacred cows’.

“The idea that because somebody is high up in government, he or she cannot therefore be touched is not good for the growth and image of the country, ” the NLC General Secretary said. (NAN)