The National Human Rights Commission (NHRC) in partnership with Mac Arthur Foundation is set to commence investigations into 153 complaints on hate speeches and election related violence around  the nation’s 2015 general elections.

In doing this, the Commission will where necessary, exercise the duty to seek criminal indictment, punishment and accountability where there is  evidence to indicate that any person has been involved in hate speeches and election related  violence in relation to 2015 elections as well as other subsequent elections.

The Acting Executive Secretary of the Commission, Mrs. Oti Ovrawah who said this at the flag off of a meeting for investigation of the complaints noted that substantiated hate speeches and election related violence would be subjected to public hearing across the states of the federation to enable indicted persons to defend themselves.

Mrs. Ovrawah said the investigations will have a positive influence in the forthcoming 2019 general elections as it is believed that this project is necessary to support the clamour for establishment of Election Offences Commission.

In his remarks, the Project Coordinator and Director, Monitoring in the Commission, Mr. Tony Ojukwu assured Nigerians that the Commission would be bold and courageous as it has always been in naming and recommending for prosecution those found culpable of hate speeches and election related violence. 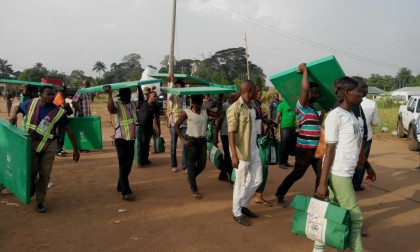 He also stated that the complaints on hate speeches and election related violence spread across the six geo political zones of the country. He disclosed that the investigations will take place between the 24th and 27th of this month with the staff of the Commission going to different states for the project.