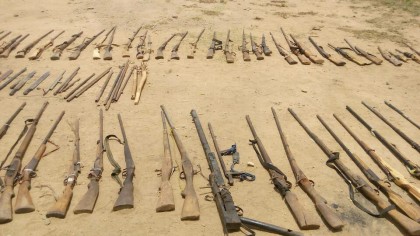 In a bold move to prevent and eradicate illegal ownership of small arms and light weapons, the Presidency has started drawing up the rules of a whistleblower mechanism to throw a spotlight on the regime of gun ownership and control in the country.

In the last few days, we had discussed the efforts the administration is making to strengthen the whistleblower mechanism in the Ministry of Finance which, to date has proved to be very effective in bringing the attention of the government to stolen assets and unexplained wealth. Read Also; How Dokpesi Got N2.1bn for Campaign – ONSA Director, Abdulmalik

In line with Presidential directives, the National Security Adviser, Maj-Gen. Babagana Munguno (rtd) has began work on a template for the discovery and recovery of illegal weapons through a reward system following the success of the whistleblower policy under the Ministry of Finance.

“The ONSA Initiative may be an independent line of inquiry or in active collaboration with what the government is doing in Finance. This will be a sort of searchlight on weapons ownership in the country. Whatever form or shape it takes, the administration wants to take a tough line to curtail the large number of illegal weapons in circulation used in intra and inter-communal conflicts. The aim is to disarm communities especially those with proclivity to violence.” Read Also; ONSA Cash: I Acted Under Badeh’s Instructions, Faleke Insists

The ONSA which already has a committee on the recovery of small arms and light weapons in the country has decided to adopt the whistleblower approach so as to eradicate mass shooting incidents and remove the harassment of law abiding citizens by holders of illegal weapons.