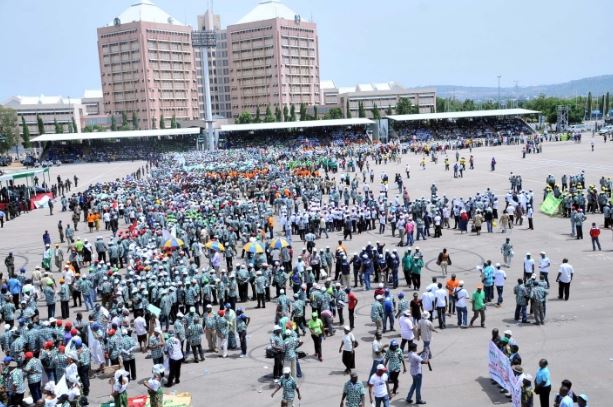 Olatunji who made the call in an interview with the News Agency of Nigeria (NAN) in Lagos on Wednesday, added that government should look into the minimum wage issue because it is of utmost importance.

NAN recalled that the NLC in April 2016 officially submitted a report to demand for N56, 000 minimum wage.

NAN also reported that the Technical Committee on Minimum Wage had submitted its report one year after the committee was set up by the Federal Government.

According to Olatunji, government should implement the wage without allowing it to cause inflation for it not to lose its relevance.

“The present N18, 000 minimum wage is not able to buy anything from the market. We want the government to increase it but it should not lead to inflation.

“Federal Government should ensure that the states and private sector should be able to implement the policy when an agreement is being reached,” the union president said.

He said that the workers have bore lots of pain because of the economic recession and needed to be compensated.

Olatunji said that business activities during recession period  made the economy unpleasant both for workers and employers, hence the May Day event would be marked in a low key.

“Before, companies such as Unilever Plc will give workers products, provide transportation and send at least 100 people to the stadium for the celebration of May Day.

“But now, the company will give money to hire a bus and send 25 to 50 workers to the rally that is the reason for celebrating workers day this year in a low key,” Olatunji said.

He said that if the economy does not improve, workers welfare would be retarded and urged the government to formulate policies that would bring relief to Nigeria workers and ensure that it was well implemented.

On foreign exchange, the NUCFRLMPE president commended the government for improving the release of Forex to companies.

He said that poor access to Forex in 2016 had intermittently stalled productivity of chemical and footwear companies and had led to sack of some workers.