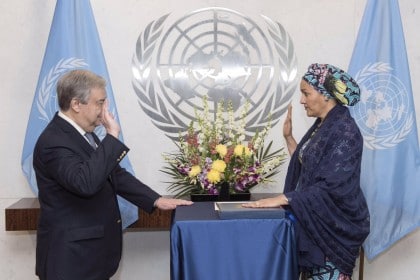 UN agencies have introduced thousands of girls and women to careers in coding and robotics as part of its annual  International Girls in ICT Day  celebrations around the world.

The UN agencies said in a joint statement that the measure was meant to encourage girls and women to pursue careers in the field of information and communications technology.

The agencies are the International Telecommunication Union (ITU), UN Entity for Gender Equality and the Empowerment of Women (UN Women), Food and Agriculture Organisation (FAO)  and UN Development Programme (UNDP).

The Secretary-General of  ITU, Houlin Zhao,  expressed the hope  that the day, marked annually on the fourth Thursday in April, “will continue to introduce more girls to ICTs and to the real opportunities that exist for them in this innovative and expanding field.’’ Also Read; #GirlsinICT: International Girls in ICT Day expands horizons for girls around the world

The UN Women, on its part, said:  “The technology sector is one of the fastest growing industries globally, but experiencing skills gap.

“The sector holds enormous opportunities for women with the requisite skills.

“But stereotypes and discrimination continue to deprive girls of the chance to excel in this field.’’

Globally, there is a 12 per cent gender gap in internet use; in the world’s least developed countries, the gap widens to 31 per cent, according to figures cited by the UN agency.

Current and emerging technology is fundamentally altering the job market, the type of jobs that will exist in the future and the skills that will be required for those jobs, it added.

“To tackle these challenges, policy tools and focused programmes are needed to shift priorities and investments  and to change the stereotypes and perceptions of women and girls in STEM fields that begin in early childhood,” UN Women said.

Since its inception in 2014, over 240,000 girls and young women have taken part in more than 7,200 celebrations of International Girls in ICT Day in 160 countries worldwide, according to ITU.

A highlight of this year’s ICT Day events was a virtual international meetup of girls in Geneva, the Lithuanian capital of Vilnius, and Beirut, through a shared game application and video link.

Girls from several African countries travelled to Ethiopia for an international conference on IT, with support from ITU, UN Women,  UNDP, UN Economic Commission for Africa and the Africa Union Commission.

In Egypt, girls participated in an ICT training camp  while in Tanzania, training teams went to public schools throughout the month of March to work with girls on mobile apps. (NAN)