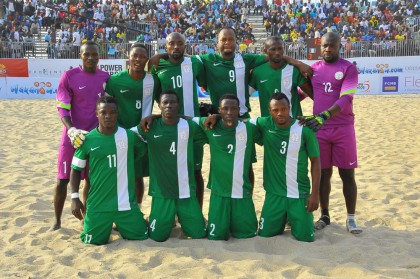 Nigeria’s Sand Super Eagles on Friday lost 6-12 to Italy in their opening Group B game of the 2017 FIFA Beach Soccer World Cup in Nassau, Bahamas.

The Audu Ejo-led side took the lead twice in the first half with goals from Igudia and Tale before the Italians rallied back to ensure the first period ended in a 2-2 draw.

Gori followed with six goals for the Italians and Paolo Palmacci contributed to the victory with a hat-trick, including two bicycle kick goals and Alfioluca Chiavaro’s goal in the third round.

The Sand Super Eagles will face Mexico on Saturday. The Mexicans, however, also lost 2-3 to Iran in the other Group B game.

The ninth edition of the tournament with 16 teams participating began on April 27 and will end on May 7. (NAN)