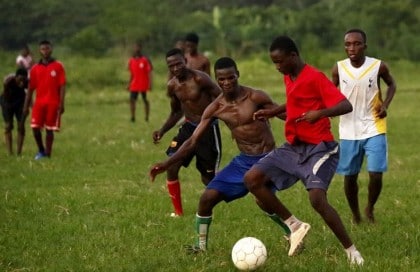 The President of Germany-based NGO, PLAY!YA, Ian Mengel, on Tuesday said that football players’ trafficking was growing at an alarming rate in Nigeria and, indeed Africa.

Mengel, a former FC Bonn of Germany player, said in Lagos that in spite of the magnitude of the problem, the Nigerian sports authorities and parents were not doing enough to address it.

He spoke against the backdrop during the organisation’s 3rd African Football and Film Festival held in Gowon Estate, Egbeda, Lagos on April 29.

Mengel said that players in Nigeria were swindled by professional clubs and agents into signing invalid endorsements.

“Exploitations are involved where players and their families sell properties to raise funds for their children to play in foreign clubs.

“It is a business scheme where players don’t enjoy but agents make billions in monetary terms,’’ he said.

Mengel added that there were laws to checkmate the development but professional
clubs and agents don’t adhere.

“Internationally, there are regulations by FIFA on how players should be endorsed. It is prohibited for a player less than 18 years to be endorsed except he is being groomed in the club’s academy.

He said that the players soon realise that they were duped and were stranded in these foreign countries and then begin to encounter difficulties.

“Young African players get to Europe and are left with no choice but to involve themselves in menial jobs.

“They engage in drug trafficking and other vices. Most of these players cannot identify their agents and find it hard to go back to their country,’’ he said.

Mengel said that with the rampant rate of player trafficking, the government and professional clubs should create more awareness about the inherent dangers.

“The Federal Government should create more awareness about player trafficking to its sportsmen and women, especially football players.

“Some of the players are illiterate; opportunities should be created where they are taught when and how to partake in endorsements.

“Professional clubs should support NGOs that are fighting to curtail player trafficking in the world,’’ he appealed.