Justice Mohammed Idris sentenced the INEC official based on a plea bargain agreement he reached with the Economic and Financial Crimes Commission (EFCC). 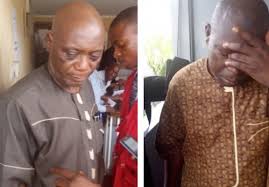 They were brought to court on a six-count charge bordering on money laundering to the tune of N500 million, which they pleaded not guilty but the second defendant later changed his plea to guilty.

Olarenwaju, thereafter, entered into a plea bargain agreement with the EFCC on May 2.

At the resumed hearing, Justice Mohammed Idris convicted and sentenced the INEC official.

“This court will temper justice with mercy.

“The court hereby adopts the plea bargain agreement as the judgment of the court”.

“That a fine of N10 million be imposed on the second defendant, upon his conviction based on count four of the amended charge.

“He shall within seven days after the payment of the fine imposed by the court, enter into a bond with the EFCC, never to be involved in economic and financial crimes within and outside the shores of Nigeria”.

The News Agency of Nigeria (NAN) reports that at the last hearing, Justice Idris had thrown out an earlier plea bargain arrangement reached by the first defendant, Christian Nwosu.

The judge had clearly maintained that the plea bargain arrangement could not save Nwosu from serving a stiffer sentence.

Justice Idris made a declaration that the provisions of the Administration of Criminal Justice Act (ACJA) stipulates that such a convict deserves a sentence that was  stiffer.

Meanwhile, the third defendant, who pleaded not guilty to the charge, was admitted  to bail in the sum of N50m with two sureties in like sum.

Idris held that the sureties must be owners of landed property  within the court’s jurisdiction.

The case was adjourned until May 15, for counsel to return and address the court on whether the case should be transferred to another judge for it to start afresh. (NAN)