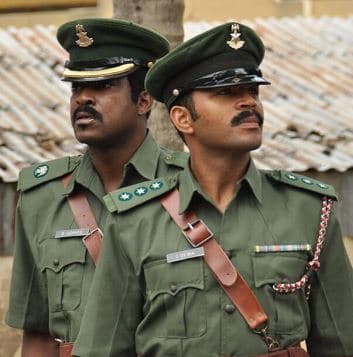 Five Nigerian Nollywood movies have been selected to compete for the “People’s Choice Award” at the 2017 edition of the Nollywood Week Paris Film Festival.

The five selected movies are ‘They Wedding Party’, 76′, and ‘Green White Green’. Others include ‘Gidi Blues’ and ‘Dinner’.

The Wedding Party (Comedy, Romances) directed by Kemi Adetiba, shows how Chaos prevails when a family prepares for a lavish wedding.

76′ directed by Izu Ojukwu, is a thrilling drama told from two points of view: that of a pregnant woman, and that of an accused soldier. Inspired by the cataclysmic Nigerian events of 40 years ago, this epic political thriller portrays the point of views of a respected army captain and his expectant wife when his coerced participation in a botched coup attempt makes national headlines.

Gidi Blues directed by Femi Odugbemi is a story of two young people (Akin and Nkem), When the two meet by chance, their story changed forever.

Green White Green directed by Abba Makama, the plot is based on Three young artist friends embark on a roller coaster ride of self-discovery after they decide to make a movie before heading off to college.

Dinner is a movie directed by Jay Franklyn Jituboh which tells how Secrets were exposed during a friendly dinner.

The prestigious ‘People’s Choice Award’ is sponsored by Angénieux, a leading manufacturers of high quality optic cinema lenses for the broadcast and film industries.

“Angénieux will gracefully put its optics at the disposal of the winner of the People’s Choice Award, giving them a chance to combine their creativity with French technical know-how during their next shoot.”

NollywoodWeek is a yearly film festival that showcases the best of the Nigerian film industry with the aim of finding a larger audience and more sustainable distribution system for these quality films.

The festival was first organized in 2013 by Okada Media, an association based in Paris, France headed by Serge Noukoué and Nadira Shakur.

It showcases the best of the Nigerian film industry with the aim of finding a larger audience and more sustainable distribution system for quality films.

The festival offers festival-goers a chance to discover a dozen movies selected by a jury of professionals.

Musical performances as well as seminars and workshops dedicated to the African cinema industry have been lined up to enrich the annual event.

The Festival ends with the traditional presentation of the Nollywood Week People’s Choice Award, which rewards some of the best talents of African cinema.