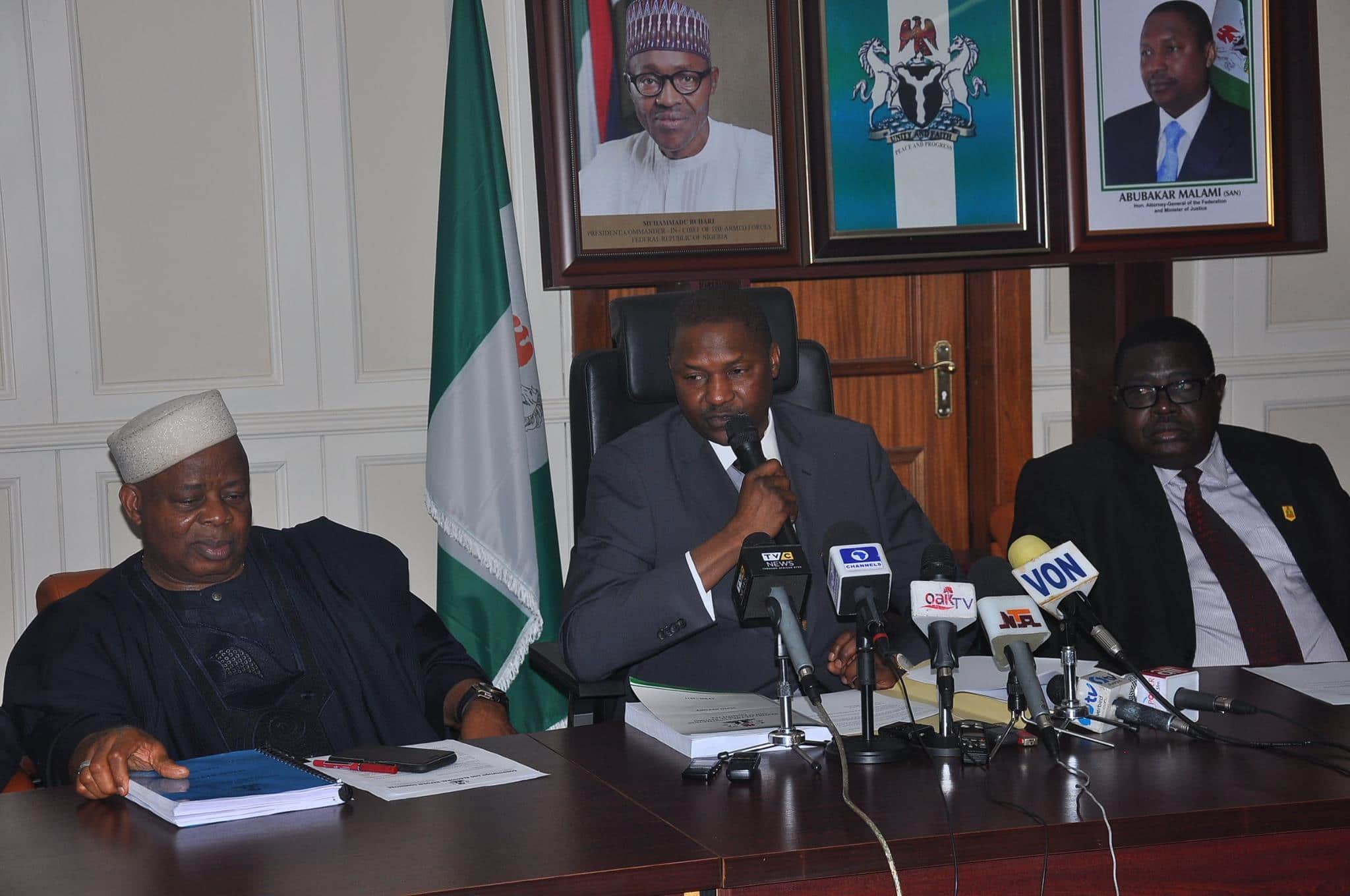 INEC, Abuja: The Senator Ken Nnamani led 24-man Constitution and Electoral Reform Committee, set up to review the laws governing the electoral process and make recommendations for reforms, yesterday, submitted its report to the Attorney General of the Federation (AGF) and Minister of Justice, Abubakar Malami, SAN.

The AGF assured that the Executive would expedite action on the recommendations and urged stakeholders to support the Federal Government by engaging the National Assembly on the speedy passage of the draft bills when transmitted.

At the report presentation ceremony held at the Ministry of Justice, Abuja, the AGF said: “The inauguration of the committee was the first major step taken by the President Muhammadu Buhari led administration towards realizing the goal of improving Nigeria’s electoral process and to put a stop to wanton destruction and violence often occasioned by failure of law enforcement agencies to tackle electoral fraud.”

Mr. Malami (SAN) expressed joy that the committee had made meaningful recommendations on “how to strengthen the Independent National Electoral Commission (INEC), the participation of independent candidates, the management of political parties, tackling of electoral offences, management of electoral dispute resolutions as well as issues affecting state independent Electoral commissions.”

“Others areas he disclosed are “the use of technology in elections, Diaspora voting and access for Persons Living With Disabilities.”

While commending the Committee members for their dedication and patriotism, the AGF said: “I wish to assure Nigerians that the committee report and draft bills will be submitted to the president immediately for his consideration and transmission to the National Assembly.”

He implored stakeholders in the electoral process, especially the Civil Society Organizations to support the government and engage the National Assembly to ensure speedy pass the bills.”

Chairman of the Committee, Senator Ken Nnamani had earlier said that the Committee swung into action soon after its inauguration on the 4th of October, 2016.

He hailed the dedication and commitment of its member who he said was exceptional, professional and patriotic in executing the national assignment.

Senator Nnamani explained that the Committee was guided by its 13 terms of reference and painstakingly carried out its job by engaging and interacting with stakeholders across the length and breadth of the country.

The report of the Committee according to Senator Nnamani was in two volumes, “the first volume is the main report containing recommendations on how to improve the electoral process in Nigeria attached to it are four draft bills on the amendment of relevant provisions of the constitution, amendment of the Electoral Act, establishment of Political Parties and Electoral Offences Commission and the establishment of Constituency Delimitation Centre.

The other volume contains minutes of our meetings, cluster reports, proceedings of the retreats and public hearings and copies of memoranda we received from the public.”

Senator Nnamani noted that the recommendations of the Committee will become the executive bill that will go to National Assembly before it will be harmonized alongside that of the Senate and House of Representatives.

He observed that the Senate had already passed its amendment to the Electoral Act but stressed that: “the Senate will find the work of the Executive useful and what they have already can be improved on.”