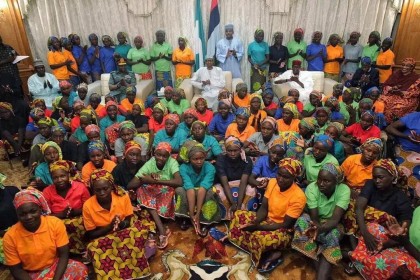 Lawmaker Urges FG On The Release Of Remaining Chibok Girls

Rep. Asabe Bashir, lawmaker (APC Damboa/Gwoza/Chibok Federal Constituency of Borno) in the House of Representatives has urged the Federal Government to ensure the speedy release of the remaining Chibok girls.

The lawmaker made the call in a telephone interview with the News Agency of Nigeria (NAN) on Monday in Abuja.

The Federal Government on Saturday announced the release of 82 abducted Chibok Girls after a successful negotiation with their abductors.
More than 200 girls were abducted from their dormitories in 2014 at Government Girls Secondary School Chibok, Borno, preparatory to their final examination.

NEWER POSTFarmers in Katsina loose N30M as irrigation dam dries up
OLDER POSTIt Is Not A Sin For President Buhari To Seek Medical Attention, Says Imam