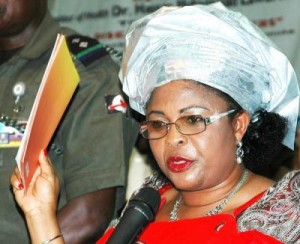 Justice M.B. Idris of the Federal High Court sitting in Ikoyi, Lagos, on Monday, May 8, 2017, rejected an application filed by a former First Lady, Patience Jonathan, seeking a declaration that she owns the sum of $9.8m domiciled in Skye Bank.

The former First Lady, through her lawyer, I.A. Adedipe, SAN, had filed an application by way of amended originating summons dated December 15, 2016, seeking a declaration that she is the owner of the money and that she is entitled to access the funds without hindrance.

Adedipe had also sought an order of the court discharging the freezing of the account. Read Also; The Sun Goofs Again, Claims EFCC Prosecuted Justice Ademola

However, the prosecution had filed a counter affidavit, challenging the competency of the amended originating summons of the applicant.

at today’s sitting, prosecution counsel, Idris Abdullahi Mohammed, urged the court to reject the application filed by the defence counsel.

“My Lord, the facts in this case are in dispute; and it is a known fact that whenever a fact is in dispute, the appropriate way of commencing this suit is by way of writ of summons, which the applicant has refused to comply with.”

In his ruling, Justice Idris upheld the submission of the prosecution counsel that the suit ought not to have commenced by the way of originating summons, which the claimant had done.

Consequently, the judge ordered parties to file their applications by way of writ of summons before the court.

The money is part of the sum of $15.5m the Economic and Financial Crimes Commission, EFCC, had stumbled on in four bank accounts domiciled in Skye Bank Plc, while investigating a former Special Adviser to former President Goodluck Jonathan on Domestic Affairs, Waripamowei Dudafa.