“We Are Proud Of You”- Rivers CP Tells Magu 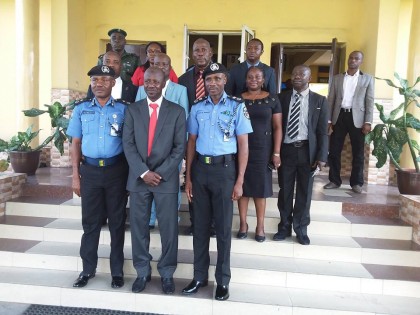 The Rivers State Police Commissioner, Mr. Zaki Ahmed has expressed satisfaction and delight in the efforts of the Acting Chairman of the Economic and Financial Crimes Commission, EFCC, Mr Ibrahim Magu, in ridding the nation of corrupt practices. According to him, Magu’s efforts have brought pride and honour to the Nigeria Police and Nigerians in general.

Ahmed gave this commendation on Monday in Port Harcourt, Rivers State, when Magu paid him a courtesy call. “You are doing a good job and we are proud of you. Corruption is a monster. It has tried to destroy the nation but with your efforts and efforts of your men, we will overcome it. Someone doing a good job like you must be faced with so many obstacles but by the grace of God, you will overcome them”, he said.

Magu was in the Port Harcourt’s Zonal office of the EFCC on a one-day working visit. Aside his courtesy call on the Police Commissioner, he also visited the Chief Judge of Rivers State, Justice Iyayi Laminkara. The visit yielded useful exchange of ideas on how to improve on the prosecution of

EFCC’S cases. Justice Laminkara reiterated her disposition and commitments to expeditious trial of corruption cases. “To this effect, there are judges that we have designated for such cases and we are making progress in this regard”, she said.

Magu was accompanied on the visits by the Port Harcourt’s Zonal Head, Mr. Salihu Ishaq and Head, Public Affairs of the Zone, Mr. Dele Oyewale among other officers.