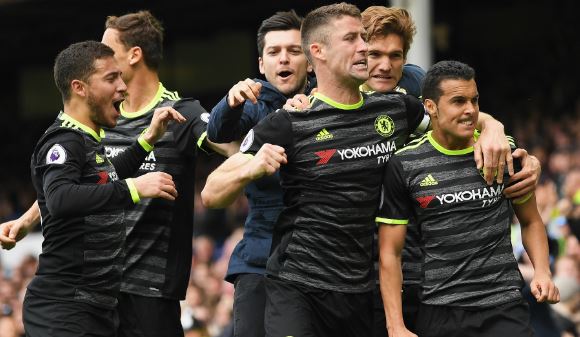 Chelsea regained the Premier League title as Michy Batshuayi came off the bench to earn a 1-0 victory over West Brom at The Hawthorns on Friday.

Following Monday’s comfortable 3-0 win at home to Middlesbrough, Antonio Conte’s side knew just three points were needed to ensure the trophy would return to Stamford Bridge and, in keeping with their efforts throughout much of the season, the Blues delivered when it mattered.

So often in 2016-17 the likes of Eden Hazard, Diego Costa and Pedro have been the men to inspire the Blues, but on this occasion it was the Belgium international’s turn to revel in the spotlight.

Hazard and Pedro had been smartly shackled by the Baggies’ resolute backline, so much so that Conte substituted his star playmakers and replaced them with Willian and Batshuayi, the latter of whom stabbed home the decisive goal eight minutes from time.

Well done to Chelsea for winning the Premier League. Well done to Antonio Conte on securing the title in his first season as manager. That – while not a unique achievement – is more than most have done. To come into a new league and hold the lead in a title race from matchday 12 to 38 is a stunning feat.

Carlo Ancelotti won it in his first season but found himself out of a job just a year later for failing to uphold Roman Abramovich’s Champions League expectations. That is something Conte has not had to worry about, given the mess Jose Mourinho made the season before, but the Italian had better take care in order to avoid the fate that befell his compatriot and title-winning predecessor Claudio Ranieri.

Fighting on more than one front was too much for him and his players, and his removal was the single-biggest factor in Leicester’s escape from relegation. Nobody is suggesting that Chelsea will be in a relegation scrap next season but Conte has got to recognise that this title was won in unusual circumstances, given that all his rivals had much more football to play. His work should not be judged on one season alone; tougher examinations are to come.

This season, Conte and his players set the standard for challengers to follow and they couldn’t keep up. A run of 13 fixtures undefeated – 39 points out of 39 – provided the crucial acceleration for the London club until their defeat by Tottenham in January. Chelsea might well have dropped 10 of their next 39 points but – Tottenham aside – no one could come within touching distance.