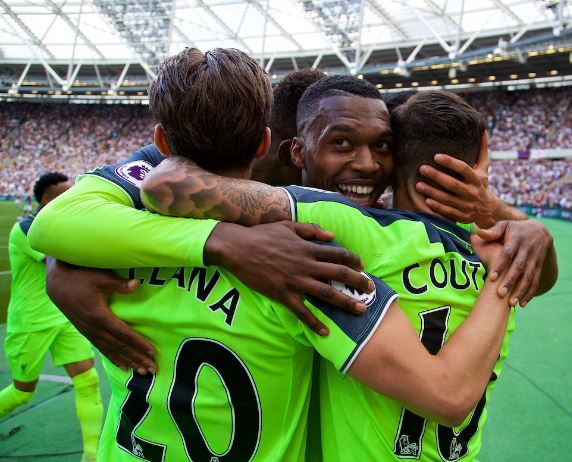 Liverpool beat West Ham at the London Stadium on Sunday to return to third place in the English Premier League, with striker Daniel Sturridge scoring his first goal since January.

Philippe Coutinho’s sublime pass on the half-hour mark cut open the Hammers defence and picked out an unmarked Sturridge who went around goalkeeper Adrian before slotting home.

The Brazilian then scored two of his own after the break before Divock Origi fired in a fourth to complete the Liverpool procession.

In a frenetic opening period there were chances for both sides.

But, as both teams settled down in the London sun, it was Liverpool’s Brazilian magician who turned up the gears and once again orchestrated a Liverpool victory.

The playmaker produced an exquisite pass from behind the halfway line for the opener as Sturridge evaded the offside trap and rolled home a tidy finish.

In spite of Liverpool’s dominance, West Ham could have however been level before the break had it not been for an astonishing miss by Andre Ayew.

They were then left to rue that mistake as the second half became a Liverpool procession orchestrated by playmaker Coutinho.

Georginio Wijnaldum’s thunderbolt pinged back off the bar and the Brazilian was the first to pounce.

He drove another shot home to make it three after a quick Liverpool counter-attack.

The Hammers woes were compounded when goalkeeper Adrian flapped at a high ball causing chaos in the box before Origi drilled in Liverpool’s fourth.

A win against Middlesbrough on the season’s final day will book Liverpool a Champions League spot in 2017/2018 season.

Liverpool were Champions League winners in the 2004/2005 season, beating AC Milan in the final in a penalty shootout by a score of 3–2, after 3-3 draw in regular time and extra time.

Liverpool’s unprecedented comeback gave rise to the final being known by LFC supporters as the Miracle of Istanbul, and is regarded as one of the greatest feats of the football club, and most thrilling finals in the history of the tournament.