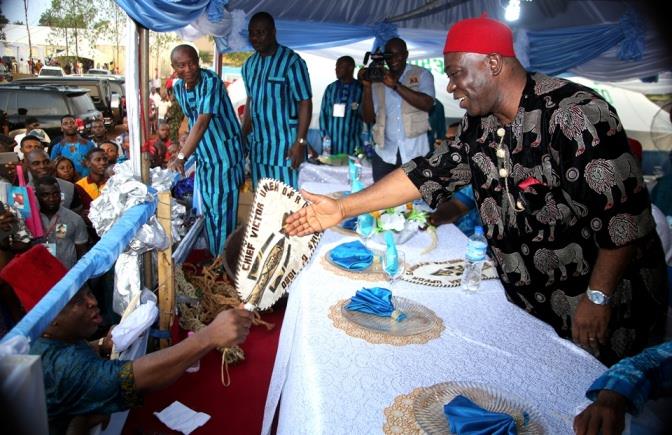 This was also on a day the people of Enugu West Senatorial District massively endorsed the Governor of Enugu State, Rt. Hon. Ifeanyi Ugwuanyi, for a second term in office.

He said: “We must always remember that the President of the country, Muhammadu Buhari, is in London for medical treatment. We must pause at every opportunity to remember him in our prayers.

“This is not about PDP or All Progressives Congress, APC, or any other party for that matter. He is the President of every Nigerian, irrespective of political divide, ethnicity, and religion. Besides, we are all human and prone to illness.

“It is, therefore, not only our prayer that God in his infinite mercy and grace will heal and bring him back at the earliest possible time to continue to lead this great country, but we also pray for divine vision, wisdom, and protection for him at all times. This is the least we owe him as a nation”.

The Deputy President of the Senate also proposed a motion, which was unanimously adopted by the mammoth gathering, endorsing Governor Ugwuanyi for a second term in office come 2019.

To make good their support, Ekweremadu presented two 18-seater buses donated by Enugu West PDP towards the reelection of the Governor.

Earlier, Member representing Aninri/Awgu/Oji River Federal Constituency, Hon. Toby Okechukwu, said the massive support to Ugwuanyi were in appreciation of the development efforts of his administration in every part of Enugu West, in addition to political appointments to the people.

The event also witnessed the defection of over 5,000 members of other political parties, notably, APC, Labour Party, and All Progressives Grand Alliance, APGA, among others, to the PDP.

In his speech, Governor Ugwuanyi announced that Local Government election would hold in the State later in the year, while efforts were at advanced stage to move the College of Education (Technical), Enugu, to Ihe, Awgu LGA, and upgrade it to a University of Education.