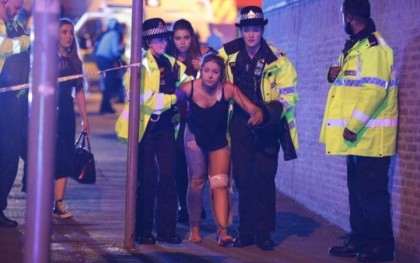 Britain’s interior minister said on Wednesday she believed the suicide bomber, who killed 22 people at an Ariana Grande concert in the English city of Manchester, had recently returned from Libya.

Asked to confirm whether Salman Abedi had recently come back from the country, Amber Rudd told BBC Television: “Yes, I believe that has been confirmed.

“When this operation is over, we will want to look at his background and what happened, how he became radicalized and what support he might have been given,” she said.

Rudd said up to 3,800 military personnel would be deployed on Britain’s streets in response to the worst militant attack for over a decade.

In another development, British investigators told French authorities that the suspect in the Manchester bombing had probably traveled to Syria, French Interior Minister Gerard Collomb said on Wednesday.

“Today we only know what British investigators have told us, someone of British nationality, of Libyan origin, who suddenly after a trip to Libya, then probably to Syria, becomes radicalized and decides to carry out this attack,” Collomb told BFMTV.

Pressed on how he knew Abedi had been in Syria, Collomb said this was the information that French and British intelligence services had.

Asked if he believed Abedi had the support of a network, Collomb said: “That is not known yet, but perhaps. In any case, (he had) links with Daesh (Islamic State) that are proven.”(Reuters/NAN)