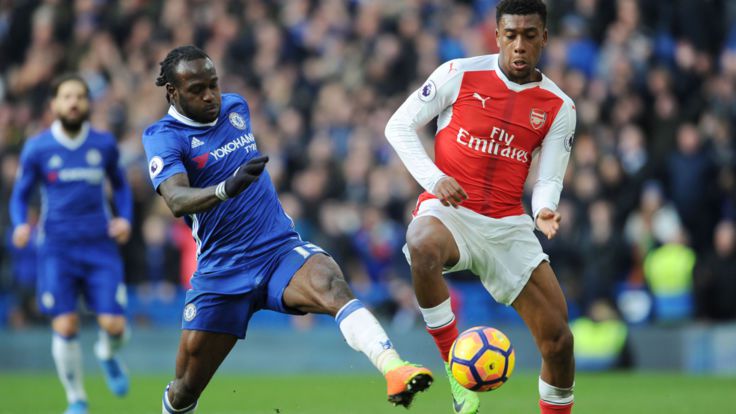 #FACupFinal It’s Arsenal vs Chelsea, To Some Nigerian Fans is Moses vs Iwobi

Wikipedia and BBC SPorts: The 2017 #FACupFinal will be the 136th final of the FA Cup, the world’s oldest football cup competition. It will take place on 27 May 2017 at Wembley Stadium in London, England and will be contested between London rivals Arsenal and Chelsea. The winners would have entered the 2017–18 UEFA Europa League at the group stage had they not already qualified.

Arsenal, as a Premier League team, started their campaign in the third round. In it, they were drawn away at Football League Championship Preston North End.

In the semi-final at neutral Wembley Stadium, Arsenal played against Premier League Manchester City and reached the final after a 2–1 win with goals from Nacho Monreal and Sánchez.

Chelsea also started in the third round where they were drawn at home against League One side Peterborough United. At Stamford Bridge, Chelsea won 4–1 with two goals from Pedro and a goal each from Michy Batshuayi and Willian despite having club captain John Terry sent off.

In the Semi-finals at Wembley Stadium, Chelsea were drawn against fellow Premier League and London rivals, Tottenham Hotspur. Chelsea reached the final with a 4–2 win with two goals from Willian and a goal each from Eden Hazard and Nemanja Matić.

Arsenal manager, Wenger will be the FA Cup’s most successful manager if the Gunners beat Chelsea and that will move him one ahead of George Ramsay’s six triumphs with Aston Villa.

However, Wenger has no souvenirs of his previous successes.

“I have no medals at home from anything. You come to my home, you will be surprised,” Wenger said.

“There is no trophy, no medal, nothing. I always give them out.

“There is always a guy at the club who did not get a medal – a member of staff – so I have given it to him.

“So you are always a medal short and you will always find someone who takes it.”

LONDON, ENGLAND – FEBRUARY 04: Alex Iwobi of Arsenal takes on Victor Moses of Chelsea during the Premier League match between Chelsea and Arsenal at Stamford Bridge on February 4, 2017 in London, England. (Photo by Stuart MacFarlane/Arsenal FC via Getty Images)

Former Chelsea midfielder Frank Lampard said “in midfielder, Mesut Ozil and Chilean forward, Alexis Sanchez, Arsenal have two players who can unlock any door at any moment at any level.”

“I know very well Arsene Wenger has done well in the FA Cup and won many trophies,” said Conte.

“I don’t think this will be the last game for Arsene, he deserves to be working for Arsenal,” added the Italian, who is seeking the Double in his first season at Stamford Bridge after steering the Blues to the Premier League title.” Conte.

“He has done a fantastic job.”

Chelsea manager rapped up by saying, “when you stay for a long time, for sure he is a good manager. We must consider him to be one of the best managers in history.”