How Low Income Earning Nigerians Can Own Houses For N30, 000 Monthly 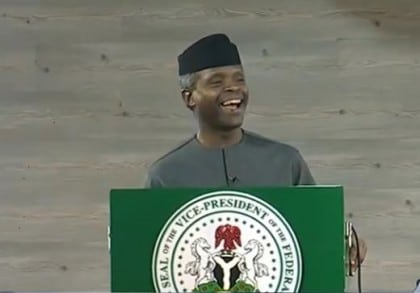 Ag President On How Low Income Earners Can Own A House

The Federal Government has started a N100 billion Family Home Fund – an initiative of the Federal Government’s social housing project that provides inexpensive mortgages to Nigerians who can afford N30, 000 per month, Acting President Yemi Osinbajo, SAN, has said.

Prof. Osinbajo who spoke about this at the May 29 Democracy Day Broadcast and at the Social Investment Programme’s score card presentation yesterday organized as part of activities to mark the 2017 Democracy Day celebration, said “already the project has started in 11 States.’’

According to him, “there is also an aspect of the SIP that has not been mentioned. This is N100 billion set aside for the Family Home Fund of our Social Housing Project.’’

Explaining the operationalization of the fund, Osinbajo said “the N100 billion is a yearly contribution to our N1 trillion Social Housing Fund, the largest in the history of the country.

“Both the World Bank and AFDB are contributors to the fund from which developers will borrow 80% of cost of project and counter fund with their own 20%.’’

Prof. Osinbajo added that “the same fund will enable us to provide inexpensive mortgages for hundreds of thousands across the country especially for Nigerians who can afford N30, 000 per month.’’

He said: “we expect that this Family Housing Fund will jumpstart and expand construction exponentially across the country.’’

For instance, some of the houses are estimated to cost as low as N2.5 million, which would be paid for through the monthly mortgages.

Earlier in his broadcast to the nation Prof. Osinbajo stated that “the 2017 budget provides for substantial investment to implement our Social Housing Programme.’’

“The Family Home Fund of our Social Housing Programme will provide inexpensive mortgages for low-income individuals and families across the country,’’ he added.