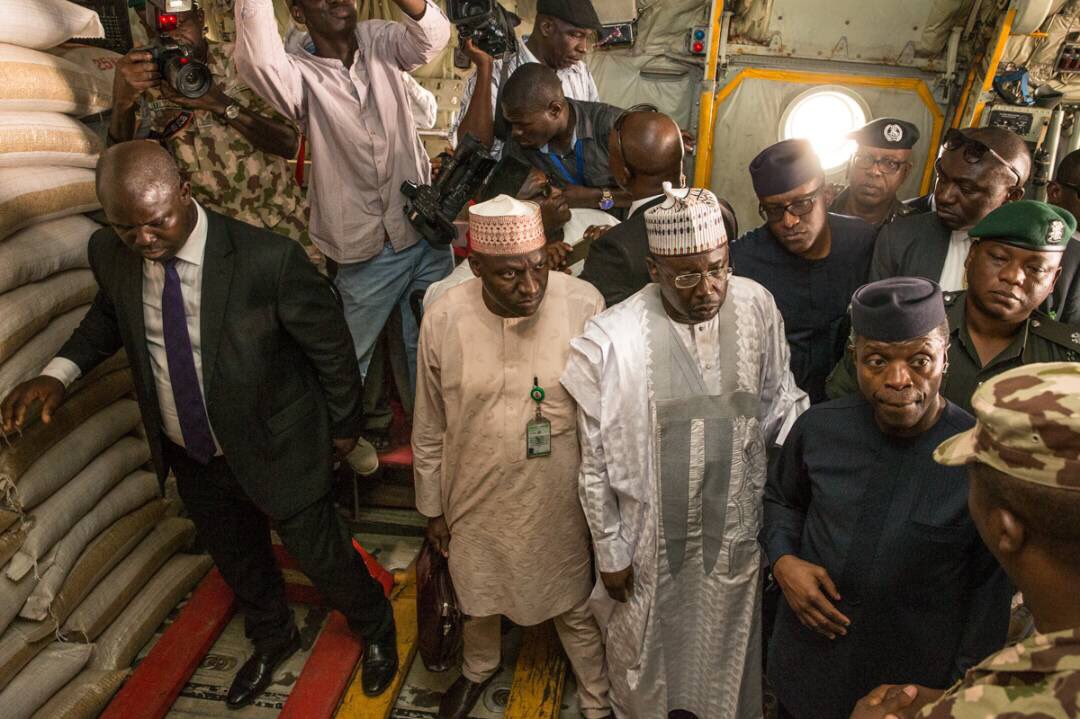 Acting President Yemi Osinbajo, SAN, today in Maiduguri unveiled a new and more effective distribution plan for delivering relief materials to Internally Displaced Persons in the North-East which departs from the undignified practice of forcing people to queue up for food.

Under the new plan which Prof. Osinbajo kicked-off at the Bakassi Camp, camp officials will now deliver food items to the IDPs at their door-steps in exchange for a pre-issued voucher.

Unfolding this new strategy, the Acting President disclosed that the plan is part of the vision of President Muhammadu Buhari for catering to the needs and welfare of IDPs in the North East region of the country

According to the Acting President, with the new plan  “we are incorporating the voucher system which do not only make the process of relief distribution transparent, it will improve our own data collection and our national capacity to plan for what will be a quarterly exercise.”

He continued: “as we restore and maintain security in the region, we must not lose sight of the need to provide social service, food, education, healthcare, shelter as well as resettlement and livelihood support.

“Today, the Federal Government flags off what will be a quarterly grain distribution programme for Internally Displaced Persons (IDPs) and by this, we are saying to our brothers and sisters in the Northeast that our country does not take their burdens lightly and we are not blind to their difficulties.

“I am particularly pleased to say that the grains that we’ll be distributing, which comprise of Sorghum, Maize, Soya Beans, and Rice, are produced locally; they are produced here in Nigeria by our own farmers.

“This has always been the vision of Mr. President for our country, to grow what we eat, and to eat what we grow and to use what we make. These grains have travelled from various locations across the country, from as far afield as Ibadan, and as close as Gombe; escorted and protected by the Nigeria Police Force, the Nigerian Military and in some cases will be airlifted by the Nigeria Air Force.”

He also added that the Federal Government would work closely with States to provide other assistance including health services to the IDPs.

Prof Osinbajo commended the partnership support from international partners such as the UN, World Food Programme, NEMA, the Military, the Police, other security agencies and State Governments in the region.

The Acting President who on arrival paid a courtesy visit on the Shehu of Borno, Umar Abubakar Gabai Ibn El-Kanemi in his palace, told the traditional ruler and members of his Emirate Council that President Buhari sees the welfare of the IDPs as the responsibility of government.

During his remarks, the Shehu of Borno thanked President Buhari for his commitment to the restoration of peace in the State and entire region. He noted the laudable efforts of the Buhari Presidency at recovering the kidnapped Chibok girls and attending to the welfare of IDPs across the region.

Earlier upon arrival in Maiduguri, the Acting President inspected the consignment of about 30,000 metric tonnes to be delivered across the region by 1,032 trucks. The distribution is for affected persons in of Borno, Yobe, Adamawa, Taraba, Bauchi and Gombe States.

Prof Osinbajo during the visit also inspected some facilities such as the NEMA warehouse, the Bakassi IDP camp office and the premises of School A located within the camp.

With the Acting President at the event were governors from the region, including Governor Kashim Shettima of Borno State, and Governor Bindo Jubrilla of Adamawa State.