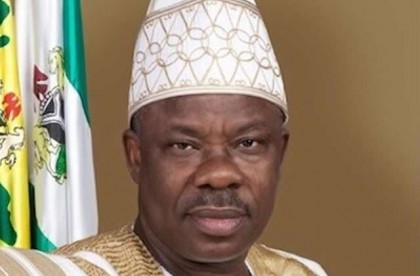 Gov. Ibikunle Amosun of Ogun said on Monday in Abeokuta, that the acclaimed winner of the June 12, 1993 presidential election, Chief MKO Abiola paid the supreme price for Democracy in Nigeria.

Amosun spoke shortly after he led a walk from the June 12 Cultural Centre, Kuto Abeokuta, to the Oke Ido family house of late Abiola.

The walk to celebrate the day is tagged “Democracy Walk: Lets Walk the Hope.”

The governor maintained that the June 12 event transcends Ogun, South West, Nigeria and Africa as a whole.

He said: “Late Abiola laboured so much for us, he paid the supreme price for Nigeria’s democracy. The struggle he died for transcends Abeokuta, Ogun, South West and Africa too, and we are happy about that.

“Nigerians trust him and that is why they voted for him. It is a history we must continue to recognise.

” He lives on. We political office holders must toe the path Abiola toed . M.K.O will continue to live on and generations will come to know what June 12 is all about. June 12 will continue.”

The human rights activist declared that until Nigeria is restructured , it would not move forward.

“June 12 votes cut across tribal and religious lines; it helps in promoting national integrity. June 12 was about three choices. It was non-violent, it was a raining day and people went out in a non- violent approach.

“As we are gathered here today, I want us to know that MKO died for us, it is our collective responsibilities to keep the spirit of MKO Abiola alive. MKO Abiola paid the ultimate price, so he lives forever.

The spokesperson of the Afenifere Renewal Group, Mr Yinka Odumakin, said that the memory being celebrated today showed that MKO was still alive.

“The issues raised by June 12 are still very much with us and if we realise this with a restructured Nigeria, it will make Nigeria better for all nationalities and all in the country, ” he said.

Responding on behalf of the family, Alhaji Tajudeen Abiola, praised the state government for supporting the family.

He revealed that when their elder brother, Bashiru was sick, the governor flown him abroad for treatment.

” The government has been supporting us, the governor always help us and all his team too. Whenever they hear you are from Abiola’s family, they always help. We really thank the governor for his support,’’ he said.