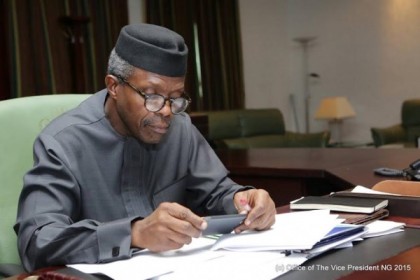 According to Personal Assistant to @NGRPresident, @MBuhari on New Media | Engagement disclosed it on his twitter handle said the Budget was signed at exactly 4:40pm Nigeria time

Also the Acting President tweeted in his handle, “I just signed 2017 Budget into law. It’s an important milestone in our economic recovery & growth plan laid in April by President Buhari’.

It could be recalled  that Mr. Osinbajo had on May 19 received the N7.441 trillion budget passed by the National Assembly.

The National Assembly had last passed the budget, increasing the total sum by N143 billion compared to what was sent by President Muhammadu Buhari.