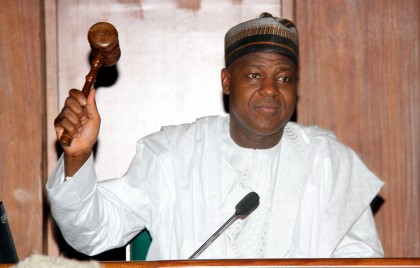 …says N/Assembly will  break 9 year jinx of non-passage of the Bill.

The Bill for protection of Whistle Blowers is a vital tool against the war against corruption in Nigeria as it will greatly enhance disclosure of information on corrupt persons when it is passed by the National Assembly, Speaker of the House of Representatives, Hon Yakubu Dogara has said.

Describing it as an essential element of the war against corruption, Dogara said it will also make it easy to uncover private collaborators who connive with corrupt public servants and provide adequate safeguards against victimisation of the person making such complaints.

The Speaker, who made the comments while delivering remarks at a workshop organised for the House of Representatives Committee on Financial Crimes and members of the civil society on the Whistle Blowers Bill in the National Assembly on Tuesday,  also argued  that the Bill, when passed, will make more information available for investigation of alleged corruption and misuse of power by public servants.

Speaking on the proposed law, he said it is important to note that Nigeria does not currently have a law that protects whistle blowers, rather “what we have is the Federal Ministry of Finance’s whistle blowing programme which is designed to encourage anyone with information about a violation of financial regulations to report,” which has not yet been backed by any legal framework, and therefore, not legally enforceable.

He also noted that the burden of corruption in Nigeria is a peculiar one that inhibits our economic and social development and added that in order to fight this scourge  and ensure a just and egalitarian society, the relationship between increased availability of information in the public domain, accountability and protection of person who expose alleged wrongdoing cannot be overemphasized.

“Disclosure of information for increased transparency is a necessary condition for accountability. The enactment of Whistle Blowers Protection law as a vehicle for the investigation of alleged corruption and misuse of power by public servants or their private collaborators and to provide adequate safeguards against victimization of the person making such complaint is therefore, an essential element of the war against corruption.”

Dogara added that the consequences of corruption are greater than just the diversion of public resources to private gain as it destroys societies and contributes to trust deficit and lack of confidence in governance, threatens sustainable economic development, ethical values and justice; destabilises the society and endangers the rule of law.

He expressed concern that the poor and vulnerable in the society suffer the harmful effect of corruption more grievously because they do not get to enjoy democratic dividends. He gave further assurance that the House of Representatives will continue to work towards enacting a robust legal framework on the Whistle Blower’s policy which will no doubt enhance quick and seamless recovery, forfeiture, and confiscation of property in respect of anti-corruption offences.

Furthermore, he expressed hope that the whistleblowers Bill will see the light of day through it’s passage into law “to break the jinx that has bedeviled this piece of proposed legislation since it was first introduced into the National Assembly in 2008.”