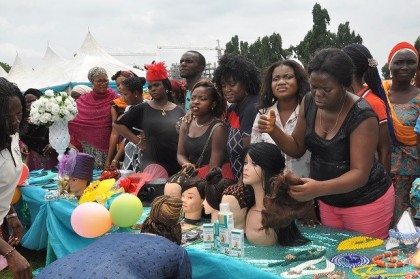 Wife of the President, Mrs. Aisha Muhammadu Buhari has called on women to use vocational skills to generate income for themselves and employ other women. She was speaking at the graduation ceremony of the Women Empowerment Programme of Future Assured in Lagos state on Thursday 16th June, 2017.
Mrs. Buhari said the beneficiaries of the training should look beyond generating income to creating employment.
The empowerment training for Lagos women, which graduated 2200 women in various skills is the second in the series organized to hold around the country. Kano has concluded its own training recently.
Speaking through Wife of the Governor of Lagos state, Mrs. Bolanle Ambode, Mrs. Buhari said “the empowerment of women helps them to be more self-confident and puts them in a position to assist their spouses in family upkeep, thereby making them more relevant in their respective homes.”
The skills acquired by the women include hair braiding, manicure, pedicure and weaving, tie and dye, soap and pomade making, as well as catering and sewing. Others include hat making, bead stringing and cap making.
Also speaking at the event, Senior Special Assistant to the President on MDGs, Princess Adejoke Adefulire, commended Mrs. Buhari for using her personal resources for the public good. She said an empowered woman has enough muscle to do more for her home by assisting with family upkeep. She also believes that women empowerment reduces cases of domestic violence.
Mrs. Adefulire called on the women to imbibe the culture of putting their hands to work, rather than expect handouts.
Some of the beneficiaries who spoke at the event thanked Mrs. Buhari for her kind gesture. Kenny St. Brown, a popular artist said she joined the catering class and learnt local and international cuisine, such that today she can organize group feeding even at short notice. She called on women to have a skill-based pastime even when they are well-to-do. Mrs. Florence Otu, another beneficiary who learnt fashion design, called on other influential Nigerians to toe the line of the Wife of the President by empowering women both with skills training and start up packs or fund.
Highlight of the occasion included the presentation of certificates to beneficiaries and inspection of their finished products.
Suleiman Haruna