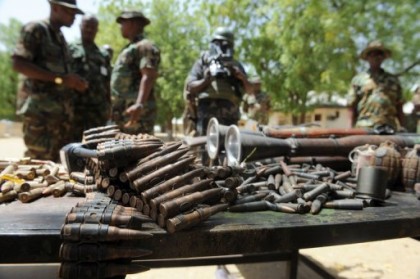 The Federal Government has been advised to mobilise the youth, especially those at the border communities, on the whistle blowing policy to expose those involved in importing dangerous weapons into the country.

Dr Thomas Alabi of the Federal University of Technology, Minna, gave the advice while speaking with the News Agency of Nigeria (NAN) in Minna on Saturday.

Alabi said that anyone or group of persons with credible information that could lead to the apprehension of those involved in the illegal business should be rewarded well.

“Whistleblowing should be encouraged so as to put an end to the spread of this illicit business.

“It will also prevent the influx of dangerous weapons into the country.

“The youths are in a better position to assist the Federal Government in exposing all those responsible for sectarian crises through arms supply,” the don said.

Alabi, who lectures at the Department of Educational Services, observed that the Nigerian youths had a great role to play in ending political violence in the country.

He also called on the Federal Government to equip security personnel with effective communication gadget and modern facilities to effectively fight crimes.

Alabi said this would greatly check the activities of those involved in importation of dangerous weapons and other crimes across the country.