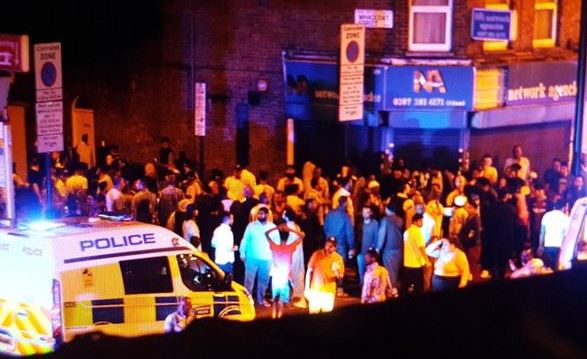 An imam intervened to stop local residents from beating a man accused of driving into people on Monday outside a London mosque after Ramadan prayers.

The suspect was yanked from the cab of his van by a furious crowd as he sought to reverse and escape after injuring 10 people in what police said was a deliberate attack on Muslims that was being treated as terrorism.

The man was being held down, beaten and kicked when Muslim cleric Mohammed Mahmoud stepped in to plead with people just to restrain him until police arrived.

“We found that a group of people quickly started to collect around him, around the assailant and some tried to hit him either with kicks or punches.

“ By God’s grace we managed to surround him and to protect him from any harm,’’ Mahmoud said.

“We managed to extinguish any flames of anger or mob rule that might have taken charge,’’ he told reporters, adding he was acting with “a group of mature brothers’’.

The suspect had been shouting earlier “I’ve done my bit’’, said Toufik Kacimi, the chief executive of the nearby Muslim Welfare House community centre, who praised the imam’s courage.

“The imam’s bravery and courage helped calm the immediate situation after the incident and prevented further injuries and potential loss of life,’’ he said.

If confirmed by authorities as terrorism, this would be the fourth such attack in Britain since March and the third to involve a vehicle driven at pedestrians.

The suspect was described by police as a 48-year-old white man, who was taken into custody.

Mahmoud called on the incensed worshippers not to commit a sin during the holy fasting month of Ramadan.

“The imam came from the mosque and he said, ‘Listen we are fasting, this is Ramadan, we are not supposed to do these kinds of things so please step back,’’’ said Mohammed, a 29-year-old cafe owner who was one of three men who held the suspect down.

“For that reason this guy is still alive today,’’ he added.

“He tried to run away but we brought him down, he would’ve died because so many people were punching him,’’ an eyewitness who gave his name as Abdul said.

There were angrier scenes as police arrived and protected the accused man as he was put into a police vehicle.

The van had hit people assisting an elderly man who had collapsed, and who later died.

It was not clear if he died because of the attack

The attack came over two weeks after three Islamist militants drove into pedestrians on London Bridge and stabbed people at nearby restaurants and bars, killing eight.

Since then incidents of hate crime have risen, police said.