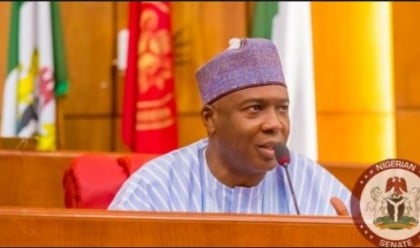 The Senate has expanded the responsibilities of one its Committees to include taking petitions from members of the public on allegations of corrupt practices in any government establishment across the country.
Senate President, Dr. Abubakar Bukola Saraki, who stated this in his speech at the 11th Annual Business Law Conference of the Nigerian Bar Association – Section on Business Law (NBA-SBL) in Lagos, on Sunday, said the decision was part of its anti-corruption policy aimed at eradicating the menace in the country.
Saraki, according to a statement by his Chief Press Secretary, Sanni Onogu, also called on the NBA to partner with the National Assembly in using amendments of existing laws and introduction of new legislative proposals aimed to curb corruption.
The Senate President reiterated that the ongoing anti-corruption war could only succeed if it is devoid of politics even as he said the anti-graft bodies need more capacity building to enable them carry out thorough investigations.
Saraki said: “On the issue of corruption, while we have continued to pursue this issue using our oversight scheme, and for which there has been remarkable success, we however, think that unless we innovate and apply smart technology we will not go too far.
“The 8th Senate is expanding its anti-corruption policy by empowering its committee to now receive corruption petitions. The National Assembly is also taking another look at the issue of expansive discretionary powers under our laws that may be contributing to make corruption fester. We would therefore want you to ponder on this and work with us to use law amendments and new legislative proposals to narrow corruption opportunities to the barest minimum.
“Corruption is one area of our national life we cannot afford to play politics with. On the prosecution of cases, it is clear that there is a whole lot of more work to be done to ensure we succeed against corruption. The trend today with the cases we have seen play out indicates that a lot more work needs to be done to guarantee better outcome. From the prosecution culture to capacity there is a need for thorough investigations to take precedence over media sensationalism.
“There may be need for better training and strategy building. Let me once again charge you as lawyers to help come up with your ideas on what legislative path we can take to help close the gap,” he said.
He said that while the 8th Senate has surpassed previous sessions through the number of bills and legislative interventions, it has also fulfilled its major promise to open up the affairs of the National Assembly and publish its budget while also using new legislation to modernize the economy.
“Our Vision going forward is that with the capital outlay and regulation it is expected that Nigeria will create 7.5 million jobs in the next five years owing solely to their infrastructure reforms,” Saraki said, adding that “to ensure a sound economy, our legal regime must be equally sound and provide an assuring platform for investors, entrepreneurs and businesses.”
He noted that the NBA has a great role to play in ensuring that the objectives of the laws passed by the National Assembly to aid the economic growth are realized.
“It is upon you who work with these legal instruments and on whom the business community and the courts will rely on providing the right advisory that will see to the realization of the full potential of these laws when signed into law.
“As you deliberate on your conference theme, it will be good to see the NBA develop new legal culture that will help promote these new laws for effectiveness. We will like to see new tools for better commercial contract development and enforcement, conflict management, private property protection, judicial protection and security of enterprise,” he said.
He stated that the NBA remains not just a stakeholder but one of the most critical voice of reason within the nation’s body polity,  hence “the Senate have continued to seek out and engage you for advice and consultations on national issues.”
He noted that the role the NBA plays in shaping public perception and the opportunity it offers as a vehicle for promoting good governance has continued to grow.
“This is why when we opened up consultations and engagement with the private sector and the wider civil society on our legislative agenda which has been anchored on the economy, the NBA was one of our first port of call,” Saraki said.