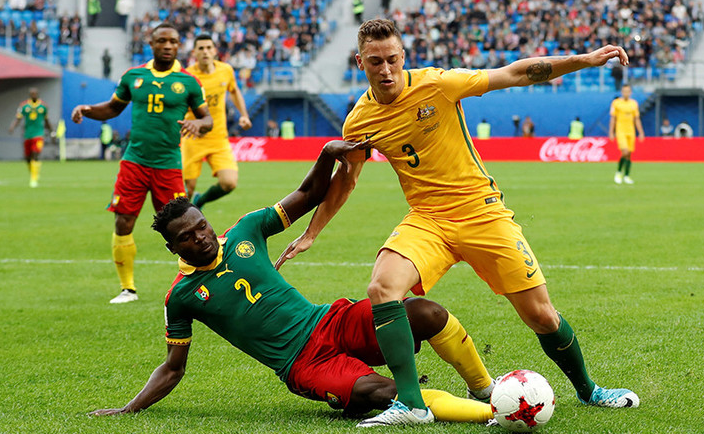 Cameroon and Australia played out a 1-1 draw in Saint Petersburg, with a point aiding neither of their hopes of reaching the FIFA Confederations Cup Russia 2017 semi-finals from Group B.

Another ponderous start had seen Cameroon lacking rhythm but, as the half wore on, they found their feet before Andre-Frank Zambo Anguissa lofted the ball over Australia goalkeeper Maty Ryan right on half-time.

Cameroon should have been two to the good but were left ruing Vincent Aboubakar’s miss when Socceroos captain Mark Milligan slotted home from the penalty spot. The African champions looked most likely to find a winner, primarily through the Besiktas forward, but they could not convert.

Members of the FIFA.com team reporter analysis, Pascal De Miramon and Pete Smith analyzed both the Cameroonian and Australian national teams play in the Match.

Pascal De Miramon said: “It’s a cruel result for the Indomitable Lions, who managed to overcome their nervous start to finish the first half ahead thanks to Zambo Anguissa. They were quick and incisive, especially on the flanks, and created the clearest chances only to drop two points on an avoidable penalty. Coach Hugo Broos said they are here to learn. Well, here’s a good lesson for the future.​”

Pete Smith said this about Australia: “Australia will be pleased they rediscovered their passing touch but, alongside that, also lamenting some costly moments. None more so than conceding a goal seconds before the break. It is the fourth match in succession they have conceded a minute either side of the end or start of a half. On the brighter side of things, 20-year-old left-sided player Alex Gersbach enjoyed a strong competition debut in just his second senior start.”

Cameroon’s Andre-Frank Zambo Anguissa who scored a coolly-taken lob, lifting the ball over Ryan on the run, was voted Budweiser Man of the Match.