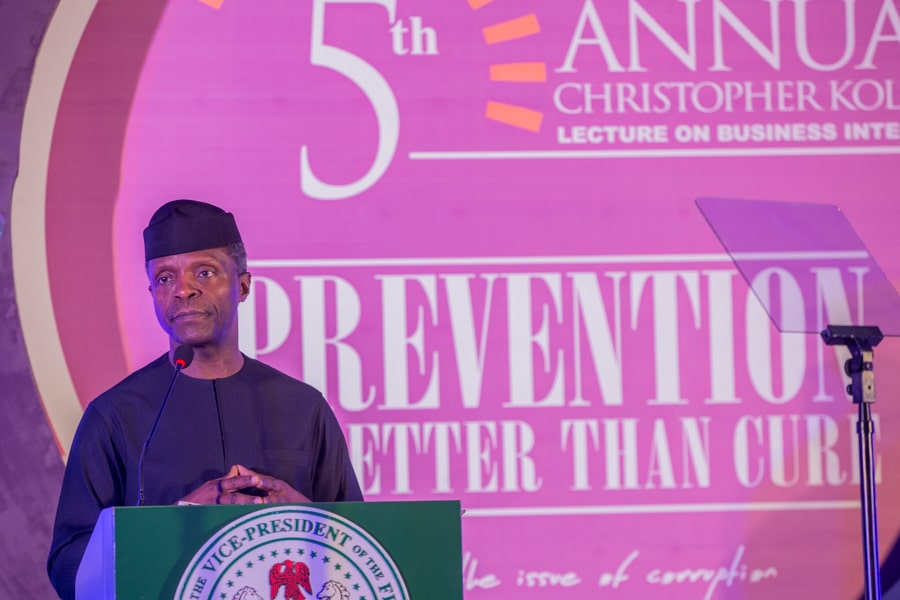 Preventing corruption is better than curing it as recovering stolen funds is costly, Acting President Yemi Osinbajo has said.

”You need to engage forensic consultants and hire other experts; even then, you will only have some hope of recovering some of what has been lost,’’ Osinbajo said on Thursday night.

He made the observation in Lagos the 5th Annual Christopher Kolade Lecture on Business Integrity.

The lecture was entitled: “Prevention is Better than Cure Even on the Issue of Corruption’’.

It was organised by the Integrity Organisation Ltd., an anti-corruption, research and advocacy organisation.

Dr Christopher Kolade is a former Nigerian High Commissioner to the United Kingdom.

“Many countries are reluctant to return proceeds of corruption by introducing legal obstacles of different kinds to ensure that we do not get back the money.

”There is a long list of “what if’’ – what if we were able to do something or invest even half of that money in economic or infrastructure
projects before it disappeared?

”If some of that money went into boosting our reserves, our exchange rate will not be where it is today; so there lies evidence that corruption is cheaper to prevent than to cure,’’ he said.

The acting president said that the negative impact of corruption on human lives and development could never be fully reversible.

”In our investigations into Defence spending, we discovered 15 billion dollars unaccounted for, with no guarantee that we will ever be able to recover it.

“You can imagine the damage done by that corrupt act,’’ he said.

Osinbajo urged Nigerians neither to condone corruption nor celebrate those indulging in it.

“Corruption is the robbery of the wealth of the nation, and thieves exist in every tribe or religion,’’ he said.

Osinbajo said that the Federal Government would continually seek ways to make it harder for government funds to be stolen or diverted.

”President Muhammadu Buhari issued an order mandating immediate compliance to the Treasury Single Account system to simplify government accounting to provide a clear picture of what is coming in and going out.

“ Over 20, 000 bank accounts have been closed since the presidential order.

”Another example is the bank verification numbers which modified application to the federal payroll; we have been able to uncover more than 60,000 cases of ghost workers.

”Another important measure is getting all our armed forces personnel on the electronic human resource payroll to prevent scams in the service,’’ he said.

The acting president added that the whistleblower policy was also aimed tackling corruption.

”The solution really is to ensure stiffer control to prevent fraud and corruption,” he said.

”We will not succeed in preventing corruption to a significant extent unless the acts of corruption are met with appropriate levels of sanctions and deterrence,” he said.

The acting president described Kolade as an outstanding man in both the public and private sectors.

He said that Kolade had integrity.

Ambode, represented by his deputy, Dr Idiat Adebule, said that more measures should be put in place to prevent corruption.

The governor described Kolade as a man who had not compromised standards, saying that the lecture in his honour would contribute to value reorientation for sustainable prosperity.

In his remarks, Kolade said: ”It is sad that we have made integrity our enemy which is why this administration is trying to fight corruption, but preventing it is better than curing it.

”My prayer for this country is that we will actually get to a point where we intensify our energies to apply prevention rather than looking for a cure that we ourselves dilute by our own behaviour.

”We all need to continue to build the good name of this country by securing a firm place for integrity as our way of life and norm in our communities.’’

In his keynote address, Mr Nick Leeson, an international speaker, said that integrity and good name would attract investors, development and growth to any business.

“We, therefore, need to be careful and prevent anything that can soil good name or integrity,” Leeson said.

”Corruption steals resources, hinders development and threatens democracy and the rule of law.

”In Nigeria, the level of corruption calls for concern, which is why our organisation is working closely with the government in its anti-corruption crusade to promote transparency, integrity and good governance,” Bolaji said.

Mr Opeyemi Agbaje, Chairman, Governing Board of Integrity Organisation, said that Kolade was an inspiration to young minds.

Agbaje said that the lecture was aimed at supporting anti-corruption actions and promote ethics and transparency.