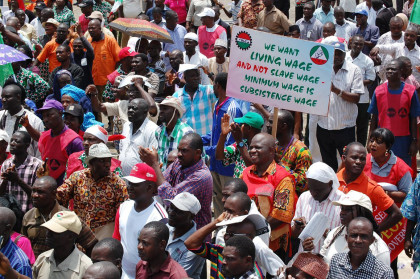 Workers of teaching hospitals and research institutions have called for urgent review of the national minimum wage to them from abject poverty and avert industrial action.

The workers, under the auspices of Senior Staff Association of Universities’ Teaching Hospitals, Research Institutes and Associated Institutions (SAUTHRIAI), made the appeal in a communique at the end of their meeting in Lagos.

The communique, made available to the News Agency of Nigeria (NAN) on Monday in Zaria, Kaduna State, was signed by the association’s Sectoral Chairman and Secretary, Felix Uwadiae and Ademola Olajire, respectively.

The communique said: “The council frowns at the delay in reviewing the current National Minimum Wage in the face of current economic realities.

“The council supports the decision of the two labour centres (NLC and TUC) to expedite actions in getting the committee appointed to commence work immediately to avert possible industrial action.”

It added that the council in session observed with great dismay the nonchalant attitude of government towards payment of 53.37 per cent salary arrears arising from wage increase since 2009. Also Read; In Kebbi: Gov Bagudu Warns Local Government Workers Against Truancy

“The council therefore demands immediate payment of the arrears, failing which workers in the research institutes will embark on industrial action.”

The communique lamented the imposition of additional tax leading to irregular deductions of salaries, allowances, union dues and other obligations by IPPIS which had resulted to workers’ untold hardship.

It appealed to the Federal Government to look into the complaint with a view to ending the difficulties being faced by workers.