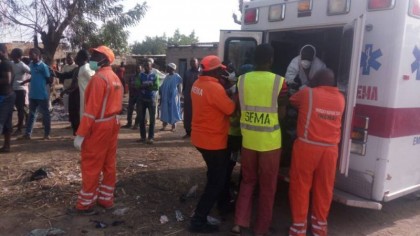 A mob on Monday attacked officials of the Borno State Emergency Management Agency  (SEMA), who were on rescue mission at the scene of a suicide bomb attack in Maiduguri.

The News Agency of Nigeria (NAN) reports that the incident occurred at Londonciki-Simari area of Maiduguri, where a female suicide bomber attacked a mosque killing eight worshipers while 15 others sustained injuries.

The youths, who attacked the SEMA Emergency Rapid Response team dispatched to evacuate corpses and render assistance to the blast victims, were said to be angered by recent spate of suicide bombings  in Maiduguri.

Some of them chanted slogans against relief officials, saying, “leave, we do not need your assistance.”

The youths, armed with club and sticks, smashed one of SEMA vehicles and prevented the team from carrying out its mission.

It took the intervention of members of the Civilian Joint Task Force  (CJTF) to rescue the SEMA officials.

An official of the state emergency agency, who pleaded anonymity, confirmed the incident, but said only their vehicle was damaged.

NAN learnt that the residents of the area had tried to apprehend the suicide bomber who was looking suspicious, but she ran into the mosque and detonated the explosive strapped on her body.

A witness, Malam Muhammad Grema, who said he lost some of his friends in the attack, told  NAN that the incident occurred at about 5:00 AM.

Meanwhile, two female suicide bombers, who attempted to cross the security trenches at about 10:15 PM on Sunday, were killed at Mammanti area on the outskirts of Maiduguri.

Soldiers guarding the trenches shot the women as  a result of which the explosive strapped to their bodies detonated,  blowing them to pieces.

The Police would brief the press on the incidents later in the day. (NAN)