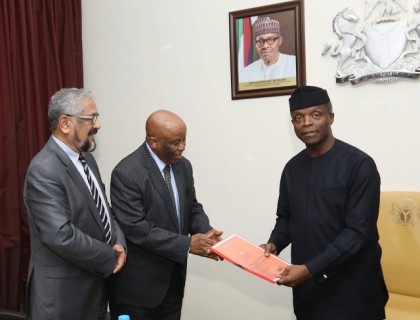 The need for the development and dissemination of alternative and counter narratives to challenge terrorism and violent extremism was again stressed today by Acting President Yemi Osinbajo, SAN.

He spoke earlier today at two different events: one while receiving a delegation of the World Leadership Alliance  a.k.a Club de Madrid which included two former African Presidents: Festus Mogae of Botswana & Cassa Muttem of Mauritus, and the other when a delegation of the Malala Fund paid him a courtesy call at the Presidential Villa. Read Also; UN commends Osinbajo’s handling of Bakassi conflict

“With respect to violent extremism I am pleased you are taking it on. It is a very complex problem of those of us who have to deal with it on a daily basis.

Continuing Prof.  Osinbajo noted that “there is no question that we need to develop counter-narratives. We are faced with emotive narratives and its now about getting people to understand through counter-narratives that there is a different way to get things done,” referring to the prevalence of terrorism and violent extremism around the world.”

The Club de Madrid, whose membership includes former President Olusegun Obasanjo, had presented him a report of a workshop it had conducted in Nigeria earlier this year on the issue of alternative narratives to counter violent extremism.

Former President Mogae who presented the report had told Acting President Osinbajo that the objective of the World Leadership Alliance is to promote democracy, and in that effort had organised the workshop that included all stakeholders and the presidency’s Office of the National Security Adviser to address the issue of violent extremism. Foreign Affairs Minister Geoffrey Onyeama attended the meeting.

During the courtesy call by the Malala Fund led by Ms. Malala Yousafzai, UN Messenger of Peace, the Acting President commended Malala, noting that “your story is an inspiration for not only young women around the world but for us all.

According to him, “Your ability to articulate issues and the courage to face down hatred and terrorism is widely acknowledged.”

The Acting President observed that while there is a connection between terrorism on the one hand and poverty and ignorance on the other, the challenge that terrorism poses on a global scale is much deeper considering cases of terrorism and hatred even in advanced societies where ignorance and poverty were not rampant.

‘We have to change the mindset and delegitimise the false ideas and notions of hatred and violence,” he added.

“Getting people to enroll in school is the easier part of the problem. The bigger one is to ensure that we don’t promote the mindset that girls are in anyway inferior and all that,” according to the Acting President.

Earlier, the Acting President also received the President of the International Civil Aviation Organization, Dr. O.B Aliu, whom the Aviation Minister of State Hadi Sirika described at the meeting as “the first black man to lead the ICAO.” (Aliu, a Nigerian, was the country’s representative before he was named to the head of the ICAO.)

Aliu led a delegation from ICAO to pay a courtesy call on the Acting President while attending a conference of the organization in Abuja on Unmanned Aircraft Vehicles, UAV.

Speaking at the meeting Prof. Osinbajo noted that the aviation industry is going to play a significant role in the economic development of Nigeria and the Federal Government is making effort to bring down the cost of aviation services in the country.

While commending ICAO for the excellent and hard work being done in the global industry, the Acting President expressed the delight that Nigeria will be hosting the International World Aviation Forum coming up in Abuja later in the year. Read Also; Ag President Osinbajo approves appointment of Ekele as CMD, UATH

Earlier, the President of ICAO, Dr. O. B. Aliu, expressed his appreciation for the warm reception he and his delegation had received since their arrival in the country and praised the government for the high security ratings Nigeria has earned in the area of aviation security.