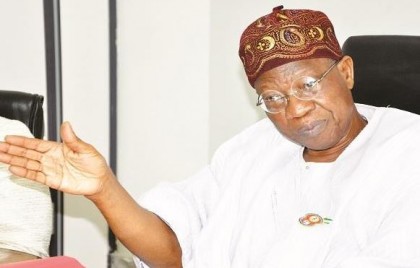 The Minister of Information and Culture, Alhaji Lai Mohammed, has said that the Nigeria entertainment industry is advancing in the areas of theatre and stage performances.

The Minister stated this  on Monday night in Lagos at the stage performances organised on the sideline of the on-going two-day Summit on Creative Industry with the theme “Financing the Film, Television and Music Industries”.

The News Agency of Nigeria (NAN) reports that the stage performances were organised by Terra Kulture Arena, the  first privately owned theatre in Nigeria by Ms. Bolanle Austen-Peters. Also Read; Minister of Information And Culture Lai Muhammed Allies Support For Military In War Against Terror

Mohammed noted that it is imperative for stakeholders to know that the creative industry is not just about films and music but also about theatre and other genres.

The minister said he was thrilled by the richness and quality of delivery of the stage plays which indicates that the theatre is going places in the country.

He commended Austen-Peters for erecting the magnificent Terra Kulture Arena to promote theatre in the country.

The minister also applauded the efforts put in a play titled : “Waka”, which he said had been successfully staged in London.

NAN reports that a presentation of “Saro, Land of Freedom”, a fusion of dance and music drama preceded the minister’s remarks.

The performance depicted the splendour, opportunities and freedom that abound in Lagos, including the bustling life and criminality side of the ever-bubbling city.

It also dramatised the effectiveness of the police to curb crimes in the city without leaving out the corrupt tendencies of the law enforcement body.

The performance momentarily transformed the audience into a church service displayed in dance and gospel tunes’ rendition.

NAN reports there were also performances of South African “Oza Oza” music and dance, clips from “Waka” play as well as “The Lion King – the story of a wicked uncle”.

The climax was the presentation of two didactic music of legendary musician Fela Anikulapo-Kuti on “bleaching” and “Ladies” which were rendered with the fusion of raving Hip Hop music.

NAN reports that the Minister of Information and Communication from the Republic of Niger, Hadjia Koubra Sani and other stakeholders attended the event. (NAN)