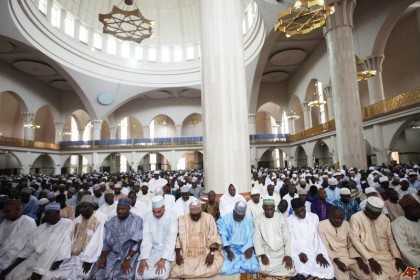 Over the weekend, some retired Christian Military Generals of Northern extraction met under the aegis of Northern Christian Elders Forum (NCEF) and blamed the present FG on its plan to Islamize Nigeria. The notables among these people include Generals Dogonyaro, Zamani Lekwot and Theophilous Danjuma.

This accusation which was given wide publicity had earlier been refuted by the Catholic Bishop of Abuja Dr. John Olorunfemi Onaiyekan not more than a week ago, who said at a function recently as Christian leader that nobody could do such a thing in Nigeria.

The Muslim Media Watch Group of Nigeria (MMWG) calls on these Elders to stop making hate-speeches and desist from using religion to cause division and confusion in the country. Also Read; We Won’t Make Laws That Will Interfere With Religion

Since assumption of office, President Muhammadu Buhari has demonstrated beyond any reasonable doubt, his commitment to religious understanding by the appointment of numerous Christian Leaders into sensitive positions. Apart from choosing the Pastor as his running-mate and who is the Vice-President and now the Acting-President. The appointment of the SGF and CJN as well as Service Chiefs among many others demonstrate beyond any doubt his non-partisanship on religious matters.

President Muhammadu would not impose any religion on 3 million peoples of diversed faiths like Nigeria. This is a lie with the teaching of Islam which command that “there is no compulsion in religion, truth stand clear from falsehood”.

The MMWG considers the pronouncement of these retired officers as cheap blackmail and reckless outbursts capable of causing religious chaos.

As Elders, they should be seen to promote religious, peace instead of fanning embers of religious hatred.

MORALITY IN THE NIGERIAN EDUCATION SYSTEM

Recently, authorities as well as Parents/Teachers Association (PTA) of a private school in Lagos-Crescent School at 1004 Housing Estate, Victoria Island, Lagos petitioned the Hon. Minister of Education on the contents of some textbooks being recommended by National Examination Council (NECO) for students of our Secondary Schools.

These books fall short of moral standard. Some of them glamorize acts of immorality and indecency such as rape, violence, kidnapping, robbery and defilement of young girls.

It is therefore not surprising today that all sorts of criminalities pervade the Nigerian Society and we as citizens continue to wonder where they came from. Nobody bother to think deeply over what sort of knowledge are our children acquiring nowadays. Who are those teaching them and what moral character they possess?

The MMWG is raising alarm that many of the textbooks use to teach our children in literature and other subjects in our secondary schools fall short of moral and ethical standard.

Take a look at this from a page in one of the books. The book is kindly titled: THE PRECIOUS CHILD written by Queen. O. Okweshine for Junior Secondary Schools students described a young lady’s body as follows: ‘if only I can find a sweet 16 to cool me down; but these eaglets with their fronts and backs fully set – Whaoooo. These tender breasts that gyrate in provocating rhythm which seem to say (pushes his chest forward) I swear to God’ (Pg. 56).

Also on page 86 of the book titled ‘TEARS OF THE BRIDE’ written by Oyekunle Oyedeji, you will find the story of Ajibike and Akofe who are in love. You will read this on Pg. 86 “tell them also that the breast of a woman in a man’s mouth tastes better than the best palm-wine.

Also on Pg. 91, you will find: “Araba comes out of his house bare to the waist and read just his wrapper. Romoke cries weakly as she comes out from the house holding her wrapper to her chest to prevent it from falling off her body.  Araba has just defiled her”.

In view of these, the MMWG urgently demand the withdrawal and cancellation of these books by the Federal Ministry of Education and NECO; and should henceforth not be used to teach Nigerian children again.

We also call for setting-up immediately a Body to screen all text books recommended by WAEC and NECO and other Examination Bodies for our JSS and SSS students and REMOVE all those that fall short of moral and ethical standards in the interest of our future.

We call on the National Council on Education (NCE) to at its meeting next week discuss this fundamental issue and come-up with lasting solution to these morally destructive textbooks being written and marketed to teachers and Parents who innocently use them for children without studying the negative implications.

Last week Wednesday, the Nation lost one of its States Permanent Secretaries to armed robbers/kidnappers.

Mrs. Olufunke Rasaq Kolawole the Osun State Permanent Secretary in the Bureau of General Services of Governor’s Office, Oshogbo was waylaid, robbed and matcheted to death by some criminals on Okene-Lokoja Abuja Federal Highway.

The incident which occurred at about 10.00am on that day also affected her driver and co-passenger, who were lucky to escape death.

The MMWG therefore calls on Federal Government to give Okene-Lokoja Federal Highway a special security attention to save lives in that axis of the Federal Highway.

It should be recalled that the road is notorious for crimes such as armed robbery, kidnapping and criminally-induced accidents.

It is highly recommended that the Abuja-Lokoja-Okene-Ibillo dualization be urgently completed to stem the tide of crimes in the area.

While commending Governor Yahaya Bello of Kogi State for its security measures to minimize criminal activities in the State, the attention of Federal authorities would save a lot of lives and property.

We call on the Kogi State Commissioner of Police to fish-out the dare-devil criminals who are terrorizing innocent commuters on that road.