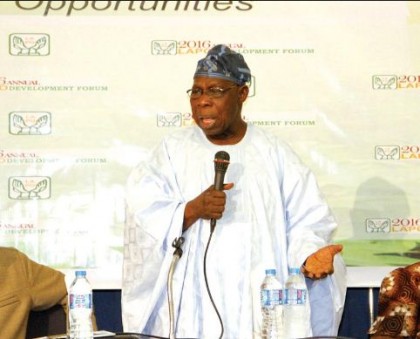 Former President Olusegun Obasanjo on Monday, called for a world without hunger in Africa through deliberate investment in infrastructure, research and development.

Obasanjo made the call in his keynote address during the 50th anniversary celebration of the
International Institute of Tropical Agriculture (IITA) in Ibadan.

According to the former president, the current population growth has made it imperative to put the context of food security on the front burner, to avoid impending famine.

“From time immemorial, man’s history has been dotted with bouts of hunger and famine; attempts have been made to explain the nexus between famine and population.

“Current prognosis suggests that if current trends continue, the world’s population in 2050 will be in the neighborhood of 9.7 billion.

“It is in this context that food security of the world for present and future generations need to be discussed,” he said.

He said that Africa needed to embark on a path of agricultural transformation that makes agriculture the real engine for growth in economics of African countries.

“The food import bill of Africa has remained ridiculously high, hovering around 35 billion dollars per annum.

“This to say the least is not only unacceptable, but also unpardonable.

“Food demand is projected to rise by at least 20 per cent globally over the next 15 years, with the largest increases anticipated in Sub-Sahara Africa and East Asia.

“If nothing is done, the food import bill for Africa will continue to shoot even higher.”

Obasanjo said that zero hunger was possible if the leadership in Africa would leverage on the gains made through technology, innovation and research.

“It cannot be achieved on business as usual terms. It can only be achieved if all relevant institutions and actors will give agriculture the attention it deserves.

“Africa must increase its investment in agriculture, most countries are far from reaching the set target to allocate 10 per cent of all public expenditure to agriculture.”

He further called for increased support for research and development for the attainment of food security, wealth creation and employment generation.

Obasanjo also called for strategies to encourage women farmers in a more significant way, including access to land, resources and inputs.

In his remarks, Dr Kanayo Nwanze, a President of International Fund for Agriculture and Development (IFAD), said that Africa should take proactive steps to invest in infrastructure for agricultural development of the continent.

“Spending 35 billion dollars on food import annually is unacceptable; it means we are losing money that could be invested to strengthen our institutions.

“Now is the time for us to act and stop talking, 80 per cent of poor people are from the developing world.

“We must commit to developing our infrastructure and markets to grow and produce our own food,” he said.

Nwanze called for private sector investment in agriculture for sustainable transformation of the agricultural sector of the continent.

“For Africa to be in a position to feed the world and succeed as a continent, the issue of youth unemployment must be tackled.

“Agripreneur is a major instrument of wealth generation and employment opportunities for the teeming population of African youths,” he said.