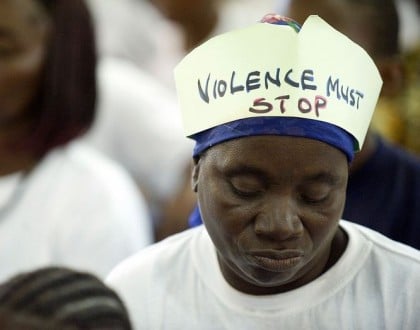 An NGO, Christian Women For Excellence and Empowerment in Nigerian (CWEENS), said on Monday in Jos that violence against women would persist unless measures were adopted to punish perpetrators.

“Perpetrators of the violence are not prosecuted; girls are commonly abused without any consequence. The evil will persist if nothing is done to punish the offenders,” Mrs. Ladi Madaki, Chairperson, CWEENS Observatory Steering Committee (OBSTEC), stated.

Madaki told the News Agency of Nigeria (NAN) in Jos that existing laws and “some insensitive policies” had made it impossible to deal with the violence, much less eradicate it

She said that some NGOs and Civil Society Organisations (CSOs) were keen on complementing government efforts to deal with the menace, but were being held back by some bottlenecks.

“If you check the nation’s statute books, there are no sufficient laws to prosecute perpetrators. There are no strong policies to address Gender Equal Opportunity (GEO) Law of 2015;  the Child Rights Act of 2005 has not been  gazetted in many states, making its implementation difficult.

“Most government organisations do not have women participating in decision making. OBSTEC is trying to fill the gap by working with the Ministry of Women Affairs in Plateau, to enlighten the society on the menace.

“The goal is to steer quick action toward addressing it,” she said.

The OBSTEC official regretted that women suffered violence at home, the work place and in crisis situation, noting that cases of sexual assault, female abduction, sexual slavery and girl-child trafficking had risen in Plateau over the years.

“Nationwide, many women suffer physical violence in their matrimonial homes; they also suffer sexual and economic violence, psychological torture and harmful traditional practices that deprive them of their self worth.”

She explained that OBSTEC, which was being funded by DFID, was committed to breaking the yoke of women suffering in silence.

“Since its establishment in 2015, CWEENS has recorded 482 cases of women violence and girls abuse,” she said.