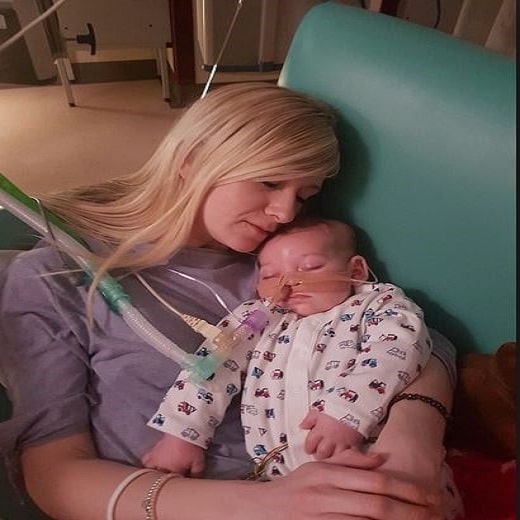 Terminally-ill Baby Charlie Gard has been set free by his parents to die, two weeks before he marked his first birthday on earth.

The parents tearfully gave up their legal battle to keep the baby alive on Monday, saying his condition had deteriorated too far for any possible recovery, in a case they said had touched the world.

The parents said their 11-month-old son might have been able to live normally if he had received experimental U.S. treatment earlier but too much time had been “wasted”.

“We have decided to let our son go,” his mother Connie Yates told London’s High Court, where a judge had been due to hear final arguments as to why a hospital should not turn off life support.

“Charlie did have a real chance of getting better. Now we will never know what would have happened if he got treatment.”

“We are now going to spend our last precious moments with our son Charlie, who unfortunately won’t make his first birthday in just under two weeks’ time,” Gard said.

Charlie has a rare genetic condition causing progressive muscle weakness and brain damage and his parents had sought to send him to the United States to undergo therapy, in a campaign backed by U.S. President Donald Trump and Pope Francis.

Britain’s courts, backed by the European Court of Human Rights, refused permission, saying it would prolong his suffering without any realistic prospect of helping the child.

The parents had begun a final attempt to reverse that decision, saying there was new evidence which showed the therapy offered by Michio Hirano, a professor of neurology at New York’s Columbia University Medical Center, could work for Charlie.

Hirano had said he believed there was at least a 10 percent chance his nucleoside therapy could improve the condition of the boy, who cannot breathe without a ventilator, and that there was a small but significant chance it could aid brain functions.

But the court heard on Monday that scans last week showed Charlie’s muscular condition had deteriorated so much that treatment would no longer work.

A Vatican spokesman said Pope Francis was praying for Charlie and his parents and that he “feels especially close to them at this time of immense suffering”.

“There is one simple reason for Charlie’s muscles deteriorating to the extent they are in now – time. A whole lot of wasted time,” his father Chris Gard said outside the court, where supporters chanted “Justice for Charlie” and waved blue balloons.

“Had Charlie been given the treatment sooner he would have had the potential to be a normal, healthy little boy.”

The case has attracted heated debate about medical ethics and whether doctors or parents should decide a child’s fate. Staff at Great Ormond Street Hospital (GOSH), where Charlie is on life support, have received death threats and abuse, something condemned by the parents and the judge.

The judge hearing the case, Nicholas Francis, said no parents could have done more for their child.

GOSH and the family will now discuss the immediate future and the parents plan to set up a fund in his honour.