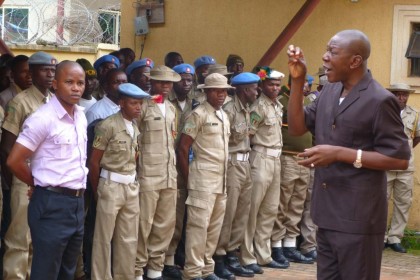 The Oyo State Command of the Nigerian Peace Corps on Wednesday lauded the Senate for  passing  on Tuesday a bill that would legitimise the activities of the corps across the country.

The state commandant, Mr Adesina Adigun, gave the commendation while addressing a rally organised to celebrate the passage of the bill.

Adigun said that the action of the lawmakers marked an official recognition of the efforts of the corps to tackle different problems associated with youth unemployment.

The News Agency of Nigeria (NAN) reports that the Senate finally passed a bill to make the Nigerian Peace Corps a para-military agency on Tuesday.

The Senate adopted the conference report on the bill to establish the Nigerian Peace Corps, after it was so advised by its committee on judiciary, human rights and legal matters.

Both the Senate and the House of Representatives had separately passed the bill last year.

The corps’s mandate is to positively engage the youth and discourage them from dissipating their energies on criminal activities in the society.

Adigun said that the command was committed to finding lasting solutions to youths’ involvement in insurgency, thug, cultism and other crimes.

“This is the only agency of government where youths are going to be in charge of their affairs.

“Youth unemployment is a huge problem for the country, second only to insurgency.

“With the recognition of the Nigerian Peace Corps as a legal agency of government, the problem of youth unemployment will be tackled,” he said.

He, however, debunked the insinuations that the passage of the bill had changed the status of corps.

“This is a problem of mistaken identity; we do not even have the power to arrest anyone.

“As youths, we will device innovative ways to gather information and tackle criminal activities in our society.

“Nigerian Peace Corps is set to ensure that crimes and other social vices are drastically reduced to the barest minimum, because we are a part of the system and we know which strategies to employ,” he said.