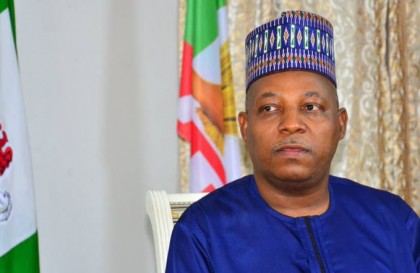 … Consoles with families of soldiers, CJTF, workers
… Says Military can confirm my dedication in fight against Boko Haram
Borno Governor, Kashim Shettima has described Boko Haram’s violent attacks on geologists and exploration workers from the Nigerian National Petroleum Corporation, NNPC and the University of Maiduguri as a tragic setback in the fight against Boko Haram and in efforts to boost Nigeria’s economic fortunes.
In a statement emailed to journalists by his spokesman, Malam Isa Gusau, Governor Shettima said since he first got information concerning the attack on his way to visit the President in London, he hasn’t been his normal self and is yet to recover from the shock of that attack.
“I haven’t been myself normal self since I received information on that attack. What happened in the first instance was a tragic setback in the fight against Boko Haram and in Nigeria’s effort to expand its economic fortunes. I am deeply pained by this incident especially coming at a time when we were beginning to pick up the pieces of our lives. Even though the attack should never have happened given the successes recorded by the Military and multi-national joint forces since 2015, I nonetheless still deem it necessary to commend the military for re-mobilising and countering the initial gains of the insurgents.
On behalf of Government and people of Borno State, I mourn and salute the soldiers and our sons in the Civilian JTF who paid the supreme price by giving their lives in this fight. ‎I commiserate with their families and loved ones. For now, I am still waiting for full details concerning the ambush by the insurgents and counter attack by the military to fully ascertain number and identity of victims.
But pending report to me, I mourn and salute any worker or supportive staff who might have lost his or her life in the course of trying to contribute in boosting Nigeria’s economy through exploration activities in the Chad basin. My heart goes to the families of every victim. The Borno State Government will never forsake the survivors of those who lost their lives defending Borno or  in service to our country. On our part, (and as can be corroborated by all security agencies, youth volunteers and hunters involved in the fight against Boko Haram) the Borno State Government has never lost focus in doing whatever is within its powers in supporting the Nigerian Armed Forces, in funding and equipping the Civilian JTF and other volunteers, in mobilizing and passing on intelligence generated from communities and in regularly briefing all those concerned with the fight against Boko Haram.
I must say that in all my series of meetings with the Presidency, President Muhammadu Buhari and the acting President, Professor Yemi Osinbajo have jointly and individually shown tremendous political will to end this carnage once and for all. I assure the good people of Borno State and other Nigerians that we are not resting on oars. We have devotedly been committed to this fight (again, as armed forces and multi-nationals involved in this battle can testify). We believe that by the power and grace of God, the battle against Boko Haram will be completed soon. I urge our military, volunteers in the Civilian JTF, vigilantes and hunters to consider what happened as a temporary setback that should strengthen our will and collective determination to defeat the forces of evil. I am confident that Boko Haram will become history, by the will of the Nigerian Armed Forces through the supreme help of God” Shettima was quoted in the statement.