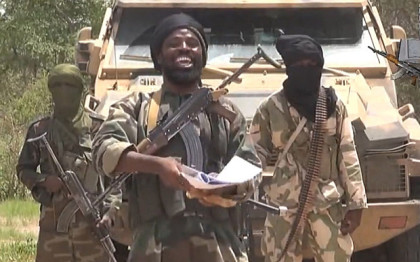 … APC demands arrest of Sheriff’s loyalist, Kolo Adam
Some loyalists of former Governor Ali Modu Sheriff ‎led by one Barrister Kolo Adam, are behind ongoing spread of dangerous rumours claiming that Boko Haram’s leader, Abubakar Shekau has been arrested at a UN rented facility in Maiduguri with the aim being to incite youths against humanitarian workers in order to destabilize the fragile peace in parts of Borno State, the All Progressives Congress, APC in Borno State has alleged.
Publicity Secretary of the APC, Makinta Zarami said in a statement issued in Maiduguri on Friday, that Kolo Adam was the first to paste information on his Facebook wall saying he had information that Shekau had been captured at the UN house with one of Shekau’s legs injured.  The APC called on security agencies to immediately arrest Kolo Adam for investigation and prosecution.
“The APC in Borno State is worried that since former Governor Ali Modu Sheriff lost his case at the Supreme Court over the Chairmanship of the PDP, his loyalists have redirected their mischief to spread different rumours with the most dangerous being that of today. We were shocked that Kolo Adam, a known associate and one of the spokespersons of Sheriff’s group, pasted on his Facebook wall today, claiming that Abubakar Shekau was arrested by the Nigerian Military at a facility rented by agencies of the United Nations in a house belonging to late Governor Mala Kachalla. The same Kolo Adam claimed that abducted Lecturers of University of Maiduguri were rescued. Immediately after Kolo Adam pasted that, some loyalists of the former Governor began to share the information through different social media platforms. The aim was to achieve series of objectives. First, it was to incite youths in Maiduguri against hundreds of humanitarian workers in order to destabilize Borno State just to create a political atmosphere of failure on the part of the APC led Government in Borno State to keep the State stable. Secondly, the rumour was to link Boko Haram with the Mala Kachalla who was a known political opponent of Sheriff so as to cleverly distance Sheriff from issues relating to Boko Haram. It was also aimed at tarnishing the image of the Federal and State Government which deal with humanitarian agencies helping highly traumatized victims of the Boko Haram insurgency.
The APC hereby demand for the immediate arrest of Kolo Adam and all those who worked with him in sharing this dangerous rumour that is capable of putting the lives of over two million IDPs at the risk of loosing food and medical support from agencies of the United Nations and other humanitarian workers. The APC also calls on security agencies to continue to do their job and take on anyone or institution with factual link with the Boko Haram so long as there proofs beyond reasonable doubt. The APC calls on the people of Borno State to dismiss this rumour while calling on all those carrying out humanitarian activities to remain calm and continue their works but with strict obedience to the laws of the Federal Republic of Nigeria and the laws of Borno State under the APC” Zarami said.