President Muhammadu Buhari, on Friday performed the 2017 Eid- el-Kabir prayer in the Daura Eid praying ground.
The News Agency of Nigeria (NAN), reports that the president who arrived the praying ground by 9:30 a.m. was cheered by Muslim faithful who thronged the ground for the Eid-el-Kabir prayer. 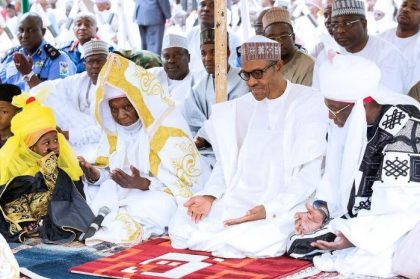 Chief Imam of Daura, Malam Salisu Rabiu, who led the prayer, in his sermon, stressed the need to respect constituted authority.

He also stressed the importance of discipline, especially among the youths, adding that discipline was paramount to the peaceful co-existence of any nation.

Emir of Daura, Alhaji Farouk Umar, used the occasion to call for sustained prayers for the socio-economic development of the nation, as well as the good health of the president.

He described some of the negative comments on the health of the president as unfortunate, adding “he is with us today, we welcome him back home.’’

NAN further reports that many of the worshipers thronged the Eid ground to catch a glimpse of the president, who cheerfully waved hand to the crowd.

At the end of the prayer that commenced at 10a.m., the president slaughtered his ram to mark the annual sacrifice. (NAN)