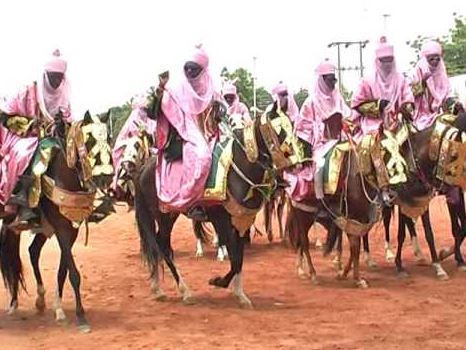 A Special Durbar called Hawan Magajiya was held in the ancient town of Daura in honour of President Muhammadu Buhari.

Although it coincided with the culmination of activities marking the Sallah festivities, for the Emir of Daura Umar Faruk Umar, the President’s return from vacation in good Health is equally important to his kingdom and worthy of celebrations.

Historically, the emir of Daura hosts a Durbar to mark and celebrate the two annual Muslim festivals Eid al-Fitr (to mark the end of the Holy Month of Ramadan) and Eid al-Adha (to mark the Hajj Holy Pilgrimage).

In Addition to them, he also hosts a Durbar of Gani which is celebrated often on the 12th day of Rabi’ al-awwal, the third month in the Islamic calendar.

The Durbar culminates in a procession of highly elaborately dressed horsemen who pass through the city to the emir’s palace. Once assembled near the palace, groups of horsemen, each group representing a nearby village, take it in turns to charge toward the emir, pulling up just feet in front of the seated dignitaries to offer their respect and allegiance.

The Durbar festival was introduced to Nigeria by colonial administrators with political objectives in mind. The word Durbar is of Persian origin and it was first linked to ceremonial assemblies marking the proclamation of Queen Victoria as the Empress of colonial India in 1877.

The ceremonies linked together pre-colonial aspects of martial display, colonist created assemblies and celebrations of important events in Northern Nigeria