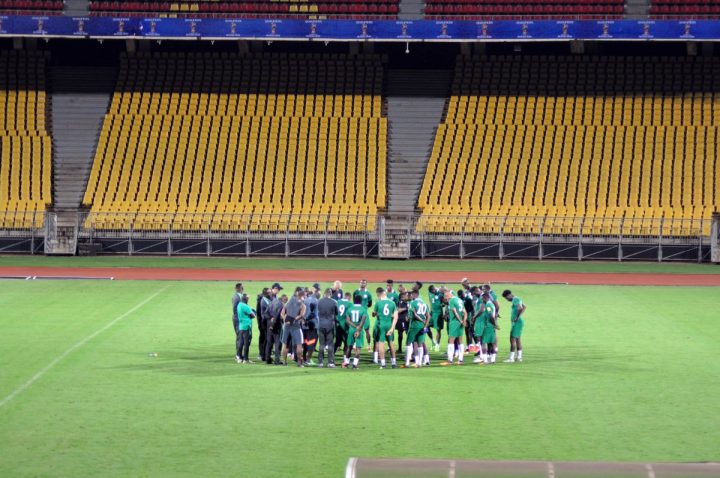 NFF President Amaju Pinnick has called for even more passion and commitment from the Super Eagles as the Nigerian delegation to Monday’s 2018 FIFA World Cup qualifying match landed in Yaounde on Sunday afternoon.

On Thursday last week, the NFF supremo and CAF Executive Committee member charged the players to approach Friday’s leg in Uyo with passion and to play with their heart, soul and spirit – the players obliged with a near –incredible 4-0 bashing of reigning African champions Cameroon on the turf of Godswill Akpabio International Stadium.

On Sunday, the Nigerian delegation touched down at the Aeroport Nsimalen-Yaounde at about 1.27pm, and Pinnick again told the players not to take their feet off the pedal as the race to Russia continues apace on Monday at the Stade Omnisports Ahmadou Ahidjo.

“The Cameroonians will come at us with everything on Monday, knowing they have to get a result and with anger born out of their humiliation in Uyo. That is why we cannot afford to relax yet. On Monday, you must play with even greater passion and show even more spirit than you did in Uyo to come out with a result here.

“The ticket to Russia from Africa Group B appears to be taking on the green-white-green colour already, but we must not relent. We must fight hard for every ball for the 90 minutes.”

They were received on arrival by the Ambassador of Nigeria to Cameroon, His Excellency Lawal Gashagar, NFF Executive Committee member Sharif Rabiu Inuwa (who was part of a three –man advance party), Consul Olajide Ogunmadeji, leader of Cameroon’s delegation to Nigeria for the first match Tado Oumarou and some officials of FECAFOOT.

The Super Eagles and their officials are staying at the Hilton Hhonors Yaounde, with the team set to have the official training at the Stade Omnisports Ahmadou Ahidjo by 6pm