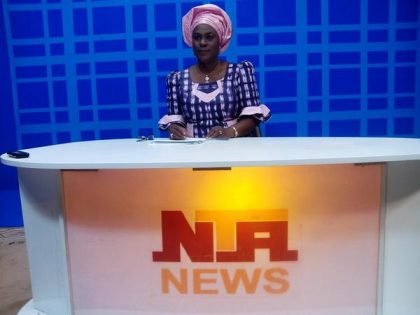 Mrs Funke Oga, Assistant Director(News) in Nigerian Television Authority (NTA), has called for better remuneration for journalists in the country.

Oga made the call on Wednesday when the campaign train of Mr Adeleye Ajayi, a Chairmanship candidate in the forthcoming election of the Lagos Council of Nigeria Union of Journalists (NUJ), visited NTA 2 in Victoria Island, Lagos.

She said that if journalists’ renumeration were well packaged, it would enhance their performance and attitude to work.

Oga lamented that journalists had lost their pride due to the “brown envelope.’’

Also speaking, an Assistant Director (News) in the station, Mr Ademolu Okuneye, urged the national leadership of NUJ to be transparent and accountable to members, especially in the ongoing biometric registration.

“How can journalists command public respect when their leaders always consider their selfish interests.

“Once they are elevated they will forget about their members who supported them to get to those positions.

“So many journalists are being maltreated in their respective organisations and what is the union doing about it,” Okuneye said.

Mr Deji Idowu, the Manager(News), said it was regrettable that the state council had neglected the chapel in terms of information sharing.

Idowu urged national executive and state leaders of NUJ to improve on members’ welfare, adding that journalists in NTA stations across the country had been meeting their financial obligations to NUJ more than any other medium.

Responding, Mr Adeleye Ajayi said he would improve on capacity building of journalists in Lagos Council if elected.

“If elected as the chairman of the union in Lagos Council, I will work with the national body of NUJ to find out the state of the Media Enhancement Bill currently before the National Assembly,’’ Ajayi said.

He said that there was the need to re-orientate members on trade unionism and not only on professional issues.

“We can call on Labour to train our members on trade unionism aspect of journalism.

“Members, including those in the News Agency of Nigerian (NAN) where am working, kicked against the payment of N5,000 for identity cards until in June when the executive members of the union came and addressed it.

“I am appealing to everyone to register and pay the money because without it , I learnt nobody will be eligible to vote or voted for,” he said.

Ajayi promised to run the union through committees as a way of carrying all members along.

He said his major focus would be in the areas of accountability, entrepreneurship and capacity building.

Ajayi, an Assistant Editor-in-Chief at NAN, is a former President of Maritime Reporters Association of Nigeria, a former Secretary of NAN Chapel and the immediate past National Financial Secretary of NUJ. (NAN)