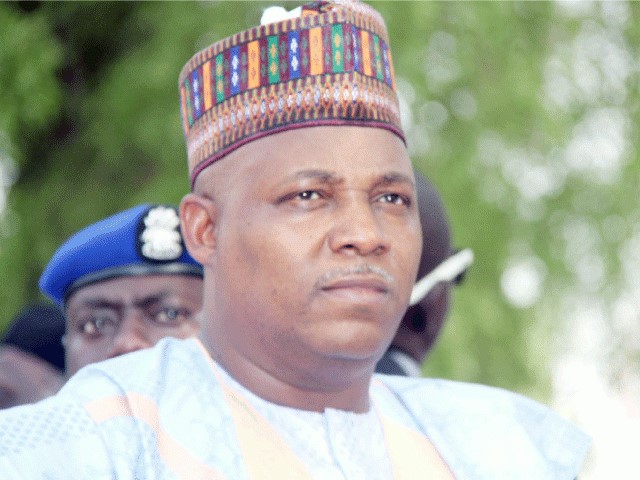 Isa Gusau, Maiduguri: Taking advantage of being in Saudi Arabia as Borno’s Ameerul Hajj, Governor Kashim Shettima has visited headquarters of the Islamic Development Bank in Jeddah ‎with focus on fast-tracking ongoing interventions by the Bank in different parts of the nineteen northern States in line with understanding between the Bank and the Northern Governors ‘ Forum back in 2016.

Shettima who is expected to depart Saudi Arabia by weekend after finalizing programmes for the return of Borno pilgrims, was received by the Vice President (Operations) of the IDB, Dr Mansur Mukhtar.

The Islamic Development Bank which is an international financial institution established by 57 countries including Nigeria through membership of the Organization of Islamic Cooperation to foster economic growth of member States through interventions in projects and programmes.

Governor Shettima’s visit to the Bank was the second as it would be recalled that a delegation of Northern States Governors’ Forum (NSGF) led by the Forum’s Chairman, Governor Kashim Shettima, visited the Islamic Development Bank (IDB) Headquarters in Jeddah, Saudi Arabia on 31st January, 2016.

During the visit, the northern Governors held series of discussions that bothered on development cooperation with the Bank taking steps to make different interventions in northern Nigeria as part of ways to tackle the general socio-economic issues of education, power supply, agriculture, poverty alleviation, maternal health amongst other problems most prevalent in parts of the old Northern region.

In his recent visit which aimed at evaluating implementation of different interventions promised by the IDB, Governor Shettima was accompanied by the Chairman Senate Committee on Defense and Senator representing Borno North, Abubakar Kyari.

During follow up discussions, the Bank’s Vice President, Dr Mukhtar gave progress report the Governor with regards to interventions to be carried out in different parts of Northern Nigeria and also in rebuilding the northeast which was affected by the Boko Haram insurgency.

Governor Shettima had earlier told the Vice President that he took advantage of being in Saudi Arabia to follow-up on discussions held between the IDB and the Northern Governors in order to find areas of challenges so that the forum can quickly address them to fast track interventions by the Bank.

“Let us know what we can do specifically to move forward. We want to join our weights to get things moving. All the short comings, all the challenges, you let us know so that we go to Abuja and address them. we have to work our talks. The issue of talking should be over. All those projects in pipeline need to be actualised. ‎I respectfully want to get updates on what has been achieved so far by the different sectors at the IDB in the northern States and areas of challenges” Shettima said.

‎In his response, Dr. Mukhtar explained that the IDB requires stronger push by the Governor’s to fast track outcomes of some communication between the Bank and Nigeria’s Federal Ministry of Finance.

“I think what we want from Your Excellency, first and foremost, is really to help us follow up on letter ssent to the Minister of Finance, forwarding the multi year framework of IDB’s intervention in the North East of Nigeria.

We want approval sent in so that it will enable us move forward.

This has gone out to the Ministry of Finance recently. We would be very glad and appreciate it if you could help us follow it up.‎ And then the Bilingual Education Project which is also outstanding, we have to follow it up through the Minister of Education, and UBEC. We will get that across to you as well.
And then, i believe other requests that we sent, about sending a pipeline of projects that we could support for the last quota of the year. We also want your support, of course we had this discussion while you were here to launch this project, the bilingual education project, a national workshop that will help mobilise and sensitize people” Dr Mukhtar said.

The Vice President said the IDB has done “a lot of background work. Both singly and in coordination partnership including the world bank and the africa development bank. We’ve been involved in supporting and will see how we can support further efforts in the North East region.

The Vice President also gave updates with respect to interventions of the Islamic Development Bank in the different states in Northern and Southern Nigeria.

“We have engaged with other stakeholders; some officials of the Borno State Government, Yobe, and Adamawa States too, to really put together a package that will help us focus on supporting. We’ve been working closely with the Borno State Government; its Ministry of Reconstruction, Rehabilitation, and Resettlement, to also identify several interventions particularly the areas that need most support like the RRR, and food security for the 3 states, so also the establishment and equipping of the Center for Trauma Management, Rehabilitation, and Reintigration in Borno State. We have formally conveyed the framework to the Federal Ministry of Finance to seek their endorsement, and with that, we will be able to prepare a detailed programme.

Dr. Mansur also listed ongoing projects in the country and the levels so far.

“We have projects to add to the current power generation capacity in Nigeria. That’s really the key project but other than that, we are trying to restart our portfolio in terms of projects, we have few under preparation; Agriculture projects in Kano, Health projects in Katsina, and roads in Ebonyi State.‎ In addition to that, we have the private sector entities, who have been involved actively in trade financing, supporting trade financing activities.

Before the meeting ended, various arms of the IDB made presentations to give updates on projects and programmes in their departments being carried out in different parts of Northern and Southern Nigeria.

There were updates on the Bank’s intervention on ‎Education, energy, urban water supply, affordable housing, and integrated development programs. The meeting concluded with all parties reaffirming their commitment to accelerated implementation of all programmes from the IDB.